Down to their last strike, the Tampa Bay Rays pulled a wild and unlikely 8-7 win over the Los Angeles Dodgers... 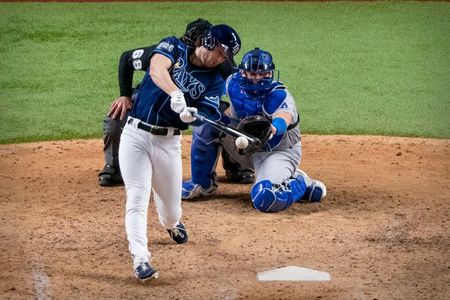 (Reuters) – Down to their last strike, the Tampa Bay Rays pulled a wild and unlikely 8-7 win over the Los Angeles Dodgers out the hat when Brett Phillips singled in the tying run followed by Randy Arozarena with the go-ahead score on an error to level the best-of-seven World Series at 2-2.

Up 7-6 in the ninth with two out, the Dodgers had looked well on the way to taking a 3-1 stranglehold on the best-of-seven series when Phillips walked up to the plate with two men on, and with two strikes connected on a line drive to right for his first career postseason hit scoring.

As Kevin Kiermaier raced across with the tying run, Arozarena stumbled to the turf turning for home and looked ready to be tagged out until a throwing error allowed him to dive onto the plate with the winning run.

“I’m having a hard time putting my emotions into words,” said Phillips. “That’s what’s special about this team – one goal, everyone coming together to win.

“We don’t rely on one guy, it takes everyone.

The contest was the type that would have had a sellout crowd on its feet, but with COVID-19 health and safety restrictions in place, only a limited number of fans were allowed inside Globe Life Field in Arlington, Texas, the neutral venue being used for the World Series.

In a game filled with pitching changes and momentum shifts, all seven Dodger runs came in innings with two outs while home runs accounted for all the Tampa scoring with the exception of Phillips’ late heroics.

The Dodgers grabbed the early lead on a pair of two-out solo homers from Justin Turner and Corey Seager, who each had four hits on the night.

Turner, who homered in the first inning of Game Three on Friday, once again provided the early excitement taking Rays starter Ryan Yarbrough over the wall in center, becoming the first player to hit first inning homers in back-to-back World Series games.

That was followed by Seager hammering his eighth home run of the postseason, putting Los Angeles ahead 2-0.

Seager would also drive in the Dodgers’ last run that put them up 7-6 in the eighth.

The Rays provided most of the fireworks at the plate, with Brandon Lowe slamming a three-run homer in the sixth to put Tampa ahead for the first time 5-4.

Arozarena, Hunter Renfroe and Kiermaier also had solo shots for the Rays in a game that often resembled a home run derby.

(This story was refiled to fix spelling of “level” in headline)

(Reporting by Steve Keating in Toronto; Editing by william Mallard)