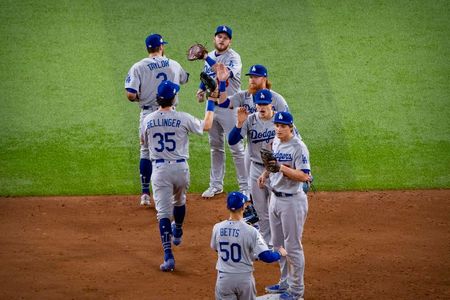 (Reuters) – Clayton Kershaw struck out six and foiled a brazen attempt at stealing home by Tampa Bay center fielder Manuel Margot as the Los Angeles Dodgers beat the Rays 4-2 in Game Five of the World Series on Sunday.

The victory gives the Dodgers a 3-2 lead in the best-of-seven series and they can seal the title with a win in Tuesday’s Game Six.

Three-time Cy Young winner Kershaw threw to catcher Austin Barnes as Margot came barreling toward home at the bottom of the fourth inning to prevent a run that would have tied the game up.

“(I) stuck with the game plan,” said Kershaw, who surpassed the record for most career postseason strikeouts with his 206th. “It’s very exciting but at the same time we’ve got to win one more game.”

Seager sprinted to second and then to third courtesy of a pair of wild pitches from Glasnow, before center fielder Cody Bellinger hit a single to bring him home for a two-run lead.

Outfielder Joc Pederson then added to Glasnow’s pain, launching a homer at the top of the second inning.

The Rays had two runs in the third but were unable to match the Dodgers’ intensity, with LA first baseman Max Muncy launching a monster 434-foot homer in the fifth inning.

“I’ve seen the ball good all year, just (with) the way baseball is the results weren’t necessarily there,” said Muncy, who has put up solid performances in the playoffs and World Series despite a .192 regular-season batting average.

The victory on Sunday puts the Dodgers one win away from ending an agonizing, 32-year wait for a championship title after reaching their third World Series in four years.

The series is being played in front of a limited crowd inside Globe Life Park in Arlington, Texas, due to the ongoing COVID-19 pandemic.