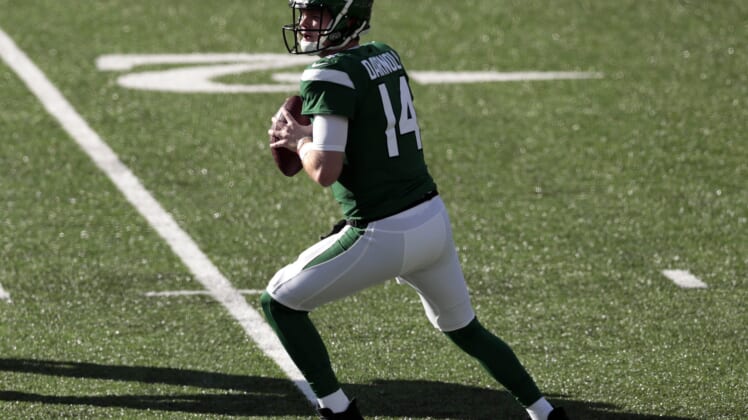 New York Jets general manager Joe Douglas faces a pivotal offseason decision surrounding Sam Darnold. Time is running out with the 2021 NFL Draft approaching and it seems the decision might now be even more complicated for New York.

When Douglas hired Robert Saleh, early NFL rumors hinted the Jets’ coach wanted to keep Darnold. But the tone quickly changed, when the team wouldn’t commit to him as the starter. Once that happened, rival general managers started calling and Douglas let everyone know he will listen to offers.

Many have since expected a blockbuster trade, with the Jets sending Darnold away and drafting a quarterback with the No. 2 overall pick. The Jets have been scouting BYU phenom Zach Wilson and Ohio State star Justin Fields heavily, adding to the growing belief that a trade is looming.

Based on the latest rumor, Sam Darnold’s future in New York could be far more complicated than realized.

NFL Network’s Kim Jones reported on NFL Free Agency Frenzy, that there are contrasting views within the Jets’ organization regarding Darold. The divide is believed to be between Douglas and the coaching staff.

New York’s general manager wants to take a chance on a rookie quarterback and has seen enough of Darnold after three seasons. But Saleh and offensive coordinator Mike LaFleur are more inclined to stick with Darnold, believing that the 23-year-old quarterback wasn’t coached very well and had a poor supporting cast around him.

It explains why, despite the league-wide interest, the Jets have played things slowly. For one, they are still working on their final evaluations of the 2021 quarterback class, with Fields and Mac Jones among the top passers who still haven’t had a Pro Day.

There is merit behind the arguments for both sides in this evaluation. Darnold only turns 24 in June and he was far from a finished product when he entered the 2018 NFL Draft. Adam Gase did nothing but hinder the young quarterback’s development, wiping out any potential growth in their two years together.

Likewise, despite Douglas’ promise to Darnold’s family that he would surround him with talent, New York’s offense has arguably had the worst weaponry in the NFL over the past three seasons.

But there are also reasons to move on from Darnold. After 38 NFL starts, he has an atrocious 59.8% completion rate, 78.6 passer rating and averaged just 6.6 yards per attempt in three seasons. He seemed to regressed from 2019 to 2020, with his passer rating plummeting from 84.3 to 72.7 and finishing with a career-worst 6.1 ypa.

Furthermore, Darnold requires a far greater financial commitment than a rookie quarterback. While he carries just a $9.8 million cap hit in 2021, the fifth-year option is projected to cost $18.86 million guaranteed. His play hasn’t earned that kind of money. While an organization could decline the option, it would mean Darnold is eligible for free agency in 2022 and might be a candidate for the franchise tag.

Ultimately, this is Douglas’ team and he makes the final decision. This could also be a leverage play by the Jets, used to convince another team to overpay in a trade for Darnold or the No. 2 overall pick. Either way, Sam Darnold’s future is more uncertain than ever.