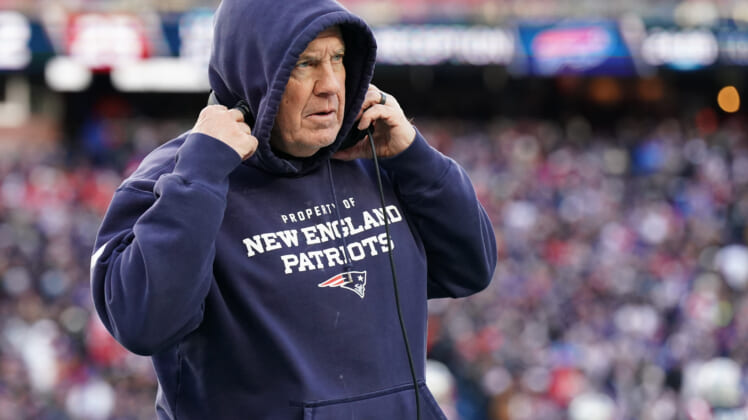 The New England Patriots entered the NFL offseason with an opportunity to make up ground on the best teams in the AFC. At a time when Bill Belichick could have surrounded quarterback Mac Jones with stronger weapons and strengthened his defense, the Patriots were essentially passed by the competition.

Those defending the Patriots’ lack of activity in the free-agent market will point towards Belichick going against the grain. He spent when others didn’t in 2020, loading up with Matthew Judon, Hunter Henry, Jonnu Smith and Nelson Agholor.

While there is still some time in the offseason for the New England Patriots to turn things around, they are shaping up to be one of the biggest losers this offseason for a number of reasons.

Belichick likely knew it was only a matter of time until Josh McDaniels left to become a head coach elsewhere. He also would have been aware that when the day arrived, McDaniels would take plenty of key members of the Patriots’ coaching staff with him. Months later, there is still uncertainty surrounding who fills those voids.

Bill O’Brien seemed like the primary target to take over as offensive coordinator and play-caller, but it seems like he is sticking with the Alabama Crimson Tide. Instead, the Patriots seemingly plan to divide up the duties for offensive coordinator with Belichick and Matt Patricia taking on expanded roles.

Losing that continuity is a blow, even with Joe Judge returning after his exit from the New York Giants. More importantly, though, New England is losing one of the best play-callers and brightest offensive minds in the NFL.

That’s going to have an impact on the entire offense in 2022. While it could be counteracted by strengthening the on-field talent, that isn’t happening.

When the New England Patriots made Henry (three years, $37.5 million) and Jonnu Smith (four years, $50 million) two of the highest paid tight ends in the NFL, many assumed we’d see more 2TE sets in 2021. Fans visualized a lesser version of the Rob Gronkowski-Aaron Hernandez duo, a dynamic pairing of tight ends who would make plays while both on the field.

According to PFF’s Doug Kyed, New England only used two tight ends on 18.6% of its snaps during the 2021 season. As Pats Pulpit further noted, that number could be dropped down even further when considering the Patriots used 12-personnel on nearly half of their snaps in Week 1 with Smith.

Fast forward to the offseason. It became apparent to even the casual observer that New England needed to add a No. 1 and No. 2 receiver to the offense to support Jones. In a crop of free agents that included Allen Robinson ($15.5 million AAV), DJ Chark ($10 million), JuJu Smith-Schuster ($3.25 million) and Cedrick Wilson ($7.35 million), the Patriots are currently empty-handed. Meanwhile, Marquez Valdes-Scantling is expected to sign for less than Agholor received a year ago.

There is also reason to wonder about the Patriots’ offensive line taking a step back in 2022. Belichick traded Shaq Mason, PFF’s third-best guard in 2021, to the Tampa Bay Buccaneers for a fifth-round pick. It created a hole on the offensive line that didn’t need to be there, raising more doubts about this offense in 2022.

Combine the loss of McDaniels along with a below-average receiving corps and the second-half dip we saw from Jones as a rookie, it generates real concerns heading into next season.

New England Patriots defense a cause for concern

Statistically, the New England Patriots defense finished as one of the best in the NFL last season. It played dominant football at times, shutting down opponents with a strong pass rush and quality play in the secondary. Unfortunately, there were signs of trouble late in the year.

Examine what happened towards the end of the Patriots schedule. New England held Josh Allen to 10 points on Dec. 6, but it needed absurd weather conditions to accomplish that. A week later, the Carson Wentz-led Indianapolis Colts score d27 points at Gillette Stadium behind 226 rushing yards.

The Patriots benefitted from facing quarterback Trevor Lawrence in Week 17 and a Belichick-coached team did its thing against a rookie. However, New England allowed 195 rushing yards to a bad Miami Dolphins offense in a Week 18 loss.

As for New England’s final two meetings against Allen and the Bills, it went poorly. Buffalo combined for 80 total points, led by Allen posting an 8-0 TD-INT ratio with 622 passing yards.

Meanwhile, the Patriots will be taking the field with massive concerns at cornerback. Jalen Mills allowed a 114.6 passer rating on 60 targets, Terrance Mitchell didn’t hold up well (104.7 QB rating allowed on 70 targets) and no one can bet on 32-year-old Malcolm Butler playing well after a year off.

Realistically, the defense is going to take a step backward in 2022. It’s a bad combination for a team with real concerns on the offensive side. Put that together, the New England Patriots lost ground in the AFC this offseason.