Mac Jones: 5 teams who are a perfect fit for Alabama QB in 2021 NFL Draft 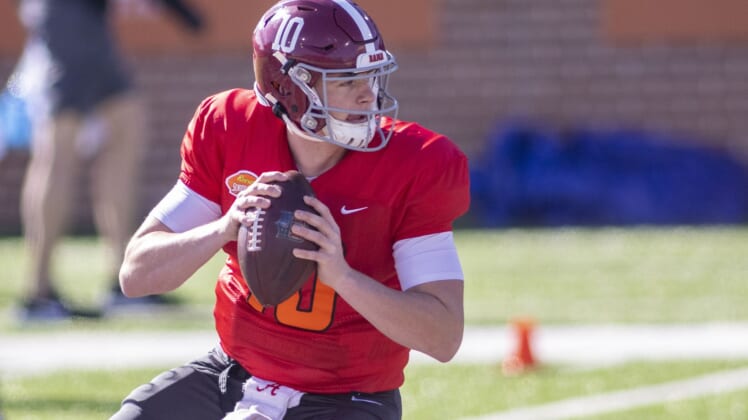 Alabama quarterback Mac Jones is considered a consensus first-round prospect in the 2021 NFL Draft, but where he lands will largely determine how successful his pro career is.

That’s the case with almost any quarterback, yet it’s especially so in Jones’ case. Lacking the phenomenal arm talent and dual-threat ability of some of his peers, Jones needs to go to a team with a solid foundation who will fully commit to building around him so that he’s not shocked after playing with such a talented Alabama team that just won the national championship.

Namely, Jones needs some combination of a strong offensive line, immense skill position talent and a stout defense. Since he’s probably going to be selected after Zach Wilson, Justin Fields and possibly Trey Lance in addition to Trevor Lawrence, the odds favor Jones to fall to a better team.

Here’s a look at five perfect fits for Jones in the 2021 NFL Draft.

Need at quarterback? Check. In range of being able to draft Jones? Check, at 15th overall.

The Patriots could run it back with Cam Newton next season, but they could also start building around a young quarterback without Newton’s wear and tear and who fits the system Josh McDaniels drew up around Tom Brady for two decades.

This isn’t to say Jones is the next Brady. No one will be. However, his skill set fits well with what New England wants. Head coach Bill Belichick has a long friendship with Alabama coach Nick Saban, and no doubt has taken notice of what Jones accomplished this past season.

Jones completed a ridiculous 77.4% of his passes for 4,500 yards, 41 touchdowns and only four interceptions. That’s the type of precision and efficiency the Pats are looking for.

Obviously, New England is in dire need of upgrades at the receiver position. Belichick has a considerable amount of cap space to work with this offseason and can pursue a premium target like Allen Robinson or Kenny Golladay on the open market. Maybe he’ll even take a shot at tight end Hunter Henry if the Los Angeles Chargers don’t retain him.

In any event, Belichick has plenty of resources available to bring in proven pass-catchers for whichever QB he rolls with in 2021. He could a lot worse than Jones, who also benefited from a strong running game in Tuscaloosa and an excellent offensive line.

Between ex-Alabama standout Damien Harris and former first-round pick Sony Michel, the Pats are well-stocked in the backfield, and finished last season as Pro Football Focus’ fourth-ranked o-line unit. Sounds like a perfect match all around.

The latest NFL rumors say at least a third of the league has inquired about trading for Seahawks quarterback Russell Wilson, who submitted a list of preferred trade destinations to Seattle’s brass.

Depending on where Jones falls in the draft, it could come to a point where the Seahawks swing a blockbuster trade and wind up drafting him as Wilson’s long-term replacement.

Seattle coach Pete Carroll loves running the ball on offense and limiting mistakes, preferring to control the clock and rely on his defense. That doesn’t mesh well with the “Let Russ Cook” movement Wilson championed to great success in the first half of the 2020 season.

This is where Jones’ lackluster running ability may actually play to his advantage. He’d be going to a winning organization in the Emerald City, have a great 1-2 punch at receiver in DK Metcalf and Tyler Lockett, and have the luxury of leaning on a run-first offense that’d position him for success right away.

Carroll and Jones seem like a strong fit in terms of philosophy, because Saban has a similar outlook, and Jones is accustomed to that. Wilson’s freelance style of play can occasionally get him into trouble and cause too many sacks. Having a less dynamic athlete like Jones at the controls would likely reveal whether or not the Seahawks’ offensive line is as bad as advertised.

Considering how well Seattle played on defense down the stretch last season, they could revert to a more run-centric offense and also build out the roster with a much cheaper QB in Jones on a rookie contract.

Jones to Seattle is really not as crazy as it sounds given the frayed relationship between Carroll and Wilson. Among the teams listed on the reported list of destinations Wilson would waive his no-contract clause for are Chicago, Las Vegas, and New Orleans. All those teams pick in the second half of Round 1, which is where Jones is likeliest to go.

Dwayne Haskins doesn’t seem like a legitimate successor to Ben Roethlisberger. Haskins is a first-round bust and reclamation project at this point, so until he proves otherwise, the Steelers still need to find Big Ben’s heir apparent.

It’d probably take a move up in the draft to get this done, but Pittsburgh can’t really afford to wait on addressing its QB depth chart. Jones would be joining an historic organization, armed with young receivers he can grow alongside in Chase Claypool, Diontae Johnson and James Washington.

Roethlisberger still needs to rework his contract in order to return in 2021, but if he plays as badly as he did down the stretch of last season, he may be riding the bench to end his career. Haskins probably won’t be ready to answer the bell. Jones could be.

Unlike Big Ben, Jones doesn’t force the ball, plays within structure, and makes good decisions. Far too often throughout his career, Roethlisberger presses and takes unnecessary risks that lead to boneheaded interceptions.

Bear in mind that the Steelers suffered a lot of injuries on defense in 2020 and many of those key contributors will return, including linebacker Devin Bush. That unit is championship-ready, but an aging field general in Roethlisberger could hold them back.

Plugging in someone like Jones who knows how to manage the game and has three capable receivers to throw to should help. There’s a lot of upside here for Pittsburgh and Jones, because he could provide an immediate upgrade over the aging Roethlisberger whenever he enters the huddle, and is a cost-effective solution to a problem the Steelers don’t have an answer for right now.

After putting on an impressive show at Senior Bowl practices, which was overseen by the Panthers’ coaches, Jones got on Carolina’s draft radar. If they can’t, in fact, pull off a Deshaun Watson despite their enthusiastic willingness to acquire the Houston Texans superstar, maybe Jones is the Panthers’ next-best option.

It’d be an interesting bit of parallel history between the past two college football seasons and NFL Drafts if Jones does wind up in Charlotte. LSU’s amazing run to the national title a couple years ago featured Joe Burrow under center, with an offense masterminded by current Carolina offensive coordinator Joe Brady.

Burrow enjoyed a meteoric rise in putting together one of the best collegiate seasons ever by a QB. He wound up being the No. 1 overall pick in 2020 for the Cincinnati Bengals.

Something similar is happening with Jones. He won’t be the first pick, but he’ll go in the first round in all likelihood. Jones wasn’t really on draft radars prior to the 2020 season, yet he led the Crimson Tide to a national championship and actually topped Burrow narrowly in passing efficiency rating (203.1 to 202.0).

Before suffering a major knee injury, Burrow was in the running with Justin Herbert for Offensive Rookie of the Year. Obviously, Brady prepared Burrow well for the pro game during their shared time at LSU.

The Panthers have Robby Anderson and DJ Moore leading the receiving corps and an All-Pro back in Christian McCaffrey who’s had over 100 catches in each of his prior two full seasons. That’s plenty for Jones to work with right off the bat, and Brady is going to put him in the best position possible to find great matchups and attack the opposing defense.

Some may look at Jones’ athletic profile and come to the conclusion that he’s not much of an upgrade from Carolina’s current starter Teddy Bridgewater. Even if he weren’t able to beat out Bridgewater right away, though, the veteran is an ideal mentor for Jones who’d be invaluable in his early development.

Lots of positives here to suggest the Panthers are an ideal landing spot for Jones, who again, already has an established relationship with the coaching staff. Another perk to this scenario for Carolina, too, is it could trade back from the eighth overall pick, accumulate more assets, and still land Jones later in the first round.

Pray tell the difference in skill sets between Jones and San Francisco’s incumbent quarterback Jimmy Garoppolo. At least when the latter entered the draft out of Eastern Illinois, he didn’t have near the college pedigree that Jones boasts, nor the pinpoint downfield accuracy and touch to all areas of the field.

Throughout his tenure with the 49ers, Garoppolo is in fact most criticized for not being precise enough with his ball placement. Jones does not struggle with this whatsoever, and while the Alabama product isn’t a supreme athlete, he moves as well or better than Garoppolo does to execute head coach Kyle Shanahan’s scheme.

Throwing a rookie into the fire right away in a tough NFC West division isn’t easy. Complex as Shanahan’s system is, though, it’s heavy on play-action passes, is very much centered around a zone-blocking rushing attack and features plenty of concepts Jones is familiar with already.

Shanahan has seen the Niners collapse when Garoppolo has been out of the lineup. Although Jimmy G helped lead San Francisco to a Super Bowl berth two years ago, there’s a reason he’s been bandied about as a replaceable player this offseason.

Jones may be viewed as a reach at 12th overall in the first round if the Niners were to take him and potentially trade Garoppolo back to the Patriots where he began his career. However, the QB class of 2021 is loaded at the top, which hinders Jones’ stock a bit, as does his inability to be a true dual threat.

The most successful QBs Shanahan has had are all dropback pocket passers, which is where Wilson thrives. But again, he has enough athleticism to extend plays or pick up the occasional first down with his legs. It may not be an obvious fit on the surface, yet Jones is as equipped as any incoming rookie signal-caller to roll with in San Francisco.