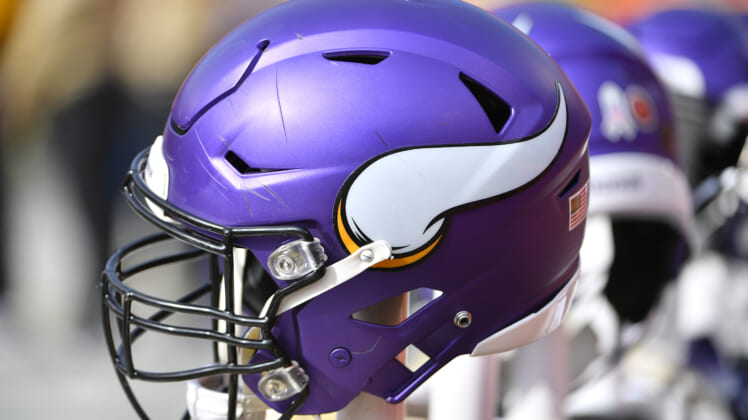 The Minnesota Vikings have a fairly typical backup quarterback situation, when compared to other NFL teams. They have the longtime vet, Sean Mannion, 30, who brings seven years of NFL experience, almost like an extension of the coaching staff. On the other side, they have the 66th pick from 2021, in Kellen Mond, the 23-year-old hotshot with a live arm and quick feet.

Both are competing for the No. 2 QB role behind Kirk Cousins, with no shot of overtaking the captain’s chair. Aside from injury.

That second factor is what makes having a capable backup so important for any NFL team, but especially one that plans to compete. With that said, the Vikings haven’t exactly been sold on the backup QB play in preseason thus far and are open to the idea of bringing in a backup.

With that tidbit, along with the eye test during the first two preseason games, the Vikings clearly aren’t done adding to the roster. Here are five ideal backup quarterback solutions for the 2022 Vikes.

If coach Kevin O’Connell wanted to provide a quick jolt to the QB room, he could have general manager Kwesi Adofo-Mensah sign Blake Bortles right now. The former No. 3 overall pick from 2014 has had an odd career ever since.

He’s actually had a few moderately productive seasons where he looks like a legitimate starting QB, but ever since his final year starting with the Jacksonville Jaguars, Bortles hasn’t been able to see the field.

Bortles may not have a big arm either, and his accuracy leaves much to be desired, but there’s no question he can operate an offense. He also brings a little bit extra to the table with his grit and toughness, being willing to take off move the chains with his feet, usually adding an extra 20 rushing yards per game on the ground.

He asked for his release from the New Orleans Saints when the team added Andy Dalton in April, and he’s yet to latch on elsewhere since. Still just 30, Bortles has plenty of tread left on his tires, and even has previous experience with the Los Angeles Rams in 2019-2020, which likely means learning O’Connell’s offense wouldn’t be a stretch. Bortles would be worth a look as a free agent.

Mason Rudolph gets a change of scenery

The Pittsburgh Steelers’ QB battle will come down to either Mitchell Trubisky or Kenny Pickett, which leaves Mason Rudolph on the outside looking in, once again. The team also has seventh-round rookie Chris Oladokun, who may just be a practice squad candidate, but either way, the team doesn’t need three capable QBs in Trubisky, Pickett and Rudolph.

With Rudolph in the final year of his contract, finding a trade partner for the former third-round pick may make the most sense. That’s where the Vikings should step in. The Steelers have selected several quarterbacks as Ben Roethlisberger‘s aged over the final years of his career, but Rudolph is the only one who’s stuck.

Yeah, he may not have ever risen to starter status, but that’s not his role in Minnesota either. The Vikings are just looking for a capable backup, and that may be all Rudolph can be. Yet there’s a reason the Steelers have never given up on the 27-year-old signal caller. As a rookie in 2019, Rudolph led his team to a 5-3 record as a fill-in starter, and he’s only continued to silently develop ever since.

Our most recent Rudolph analysis takes us to the preseason, where the fourth-year pro has been steady, but not strong enough to overtake Trubisky or Pickett, who also have yet to make a mistake.

Those stats may not be incredible, but they’re much better than Mond and Mannion to this point.

Trading for Rudolph wouldn’t cost anything more than maybe a fourth or fifth-round pick, which is a small price to pay when securing a backup QB who helps everyone sleep better at night.

Prior to the preseason, it may not have seemed like Nick Foles would be available. He just signed with the Indianapolis Colts this offseason, where he gets to link back up with Frank Reich to form a Super Bowl head coach/QB duo, reliving their glory days with the Philadelphia Eagles.

But then second-year pro Sam Ehlinger started popping off. The former sixth-round pick may already be prepared for backup duties behind Matt Ryan, and they still have undrafted rookie Jack Coan who may be fit for the NFL too.

The best days of Foles are behind him. The 33-year-old QB is likely never winning another Super Bowl as a starter. But if there’s anything the journeyman has proven, it’s that he always stays ready. Whenever a team needs to call on their backup, Foles will be prepared to put on a show.

His starting days may be done, but no one questions his ablilty to be a backup, and one might argue, he’s one of the better QB2s in football. A player with 56 starts, and a career 29-27 regular season record, Foles would be a fine fallback option, and a trade would likely only cost a sixth or seventh-round pick.

The new regime seems to place a high value on having QBs with mobility who can throw on the run and execute play-action rollouts with ease. When thinking of big-armed QBs with agility and awareness, who else comes to mind other than Colin Kaepernick?

A free agent who’s been long awaiting an offer, maybe it’s time the Vikings bring him in for a tryout too. At this point it’s likely far too late to expect him to be the QB2 by the start of the year, but we’ll take his ceiling and floor over Mannion.

Kaepernick’s shown he can be a leader on the field and in the locker room. The Vikings don’t need someone to take over the team, but should an injury occur to Captain Kirk, you want someone who has no trouble commanding the huddle and winning over the locker room, and Kaepernick has always been able to connect, whether it’s with his passes or on a personal level.

Plus, adding a dual-threat like Kaepernick would add another weapon to an already high-powered offense. If it’s just as a backup, what do they have to lose?

Talk about a guy with moxie. That’s Gardner Minshew all the way. Sure, the Vikings will trade for Minshew, and they’ll establish that he has no chance at winning the starting gig, but the mustache won’t hear that. He’ll work as if he’s the QB1 anyway.

Minshew always has a chip on his shoulder, and we want him for his drive and determination. At 26, Minshew already has 22 starts across three seasons, but he’s stuck behind Jalen Hurts. A former sixth-round pick, he’s entering the final year in his rookie contract, so it’s possible the Eagles would consider a trade.

Getting Minshew in tow now would prevent the Vikings from being forced to add another QB next year. Maybe they bring him aboard now as sort of a one-year rental, trying to determine if they want him as a long-term backup, or maybe they even like him enough to possibly return to starter status?

No matter what, having Minshew and Mond enter training camp in a battle for the QB2 role next season would bring about a fun competition. Yet, if he had to make some spot starts this season, no one would be worried about his ability to move the chains.

Trading for Minshew shouldn’t cost anything more than a draft pick starting in the fifth round or later.

Every team, whether a playoff competitor or not, needs a viable backup. Mond and Mannion haven’t even shown the ability to operate the offense with efficiency yet. We’ve seen plenty of other quarterbacks lead their teams down the field with ease in the preseason, but not the Vikings.

Mond has clearly shown the arm talent, with a lively arm and he can move around and escape the pocket. Isn’t this exactly what Vikings fans clamoring for change at QB for the past few years have dreamed of?

Unfortunately, that’s hiding the full picture. Mond also has taken forever to make his reads, sometimes locks in on his target, and seems to make pre-determined throws/decisions. He looks extremely raw, but no one is talking about giving up on him just yet. This kid just turned 23, and he was always seen as a long-term project. The tools and traits for Mond to be a starter are there.

At this point, it’s all between the ears, which is better than expecting Cousins to become more athletic or mobile. And it’s not like you can turn a noodle-armed QB into one with a cannon. This is why it’s worth it to work with Mond to see if we can take this tantalizing ball of clay brimming with potential, and someday mold it into a masterpiece.

It’s great that he’s been able to get his feet wet this preseason. Now Mond and the coaching staff can look at the tape and try to improve, refining the weaknesses in his game throughout the year. The hope is to see exponential growth by next preseason, not that he’s expected to enter as a starter either, but if he can’t claim the backup job by that point, all hope may be lost.

For now, it’s hard to argue against Mannion being the backup, as he can actually deliver balls on time and quickly work through his reads. He looks like he’s operating an NFL offense, even if it hasn’t been so efficient. But it’s still a lot better and more smooth than Mond.