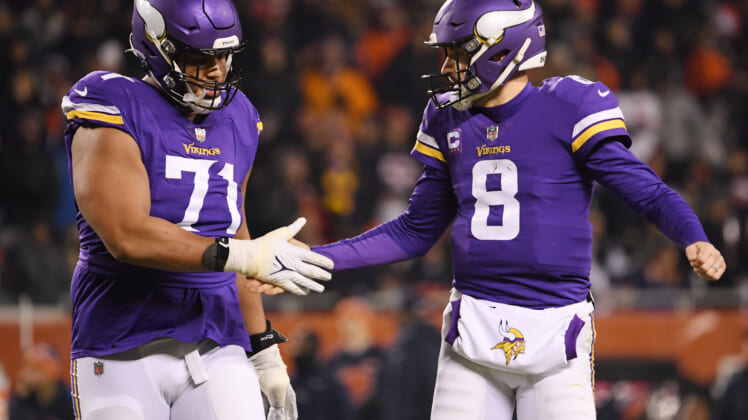 There have been many factors that have prevented the Minnesota Vikings from taking the next step from pretender to contender status over the past few years. Several different arguments could be made, but perhaps the one constant letdown has come along the offensive line.

Year in, year out, we see Vikings quarterbacks running for their lives shortly after the ball is snapped, or sometimes it’s forcing Dalvin Cook to make two defenders miss before he’s even reached the line of scrimmage.

This means operating the coach’s gameplan becomes incredibly difficult when they’re constantly losing the battles in the trenches. Kirk Cousins may have a good arm, but he’s not the most mobile quarterback out there, and everyone needs a clean pocket to operate from, no matter how athletic you are.

Many who have witnessed the Vikings in recent time would agree, the offensive line needs to improve to maintain a top-10 offense. The last thing anyone wants is for Kevin O’Connell, an offensive guru, to come in and not be able to run his scheme only because the dam keeps letting pressure through at an unmanageable rate.

Here’s why the Vikings shouldn’t have to worry about their protection holding up in 2022. In fact, we’d argue it just might even become a strength of theirs this season.

The Vikings may have had to wait a while to find their franchise left tackle, but it appears they’ve finally found a blindside protector who has the potential to be elite as soon as this season. After selecting Christian Darrisaw with the 23rd pick a year ago, he suffered through a few different injuries, which delayed his debut until Week 4.

But he didn’t play any offensive snaps until the following week, and then became a starter for the first time in Week 6. The Vikings were already 2-3 at this point in the season and faced an uphill climb the rest of the way. Unfortunately Darrisaw had another minor injury in Week 11 and he had to sit out the next two games.

In all, four of the team’s seven losses came in games without their left tackle in the lineup.

Even though it took a bit to find his groove, Darrisaw graded out well, per Pro Football Focus, ranking as the 12th-best run-blocking guard among those who played at least 50% of his team’s snaps.

We’d still like to see a bit more consistency out of the 23-year-old tackle in pass protection, but that comes with experience. Though Darrisaw did close out the season on a high note. Two of his best performances as a pass blocker came in Weeks 16 (80.8 grade) and 18 (84.6 grade), so he may have been figuring things out as the games went along.

Now turn the calendar to 2022, and Darrisaw has looked every bit like a future All-Pro bookend, drawing praise from 49ers left tackle Trent Williams and the Vikings coaching staff. Expect to see Darrisaw in the mix when Pro Bowl teams are named later this season.

Ed Ingram might be the real deal at right guard

When the Vikings selected another offensive lineman in the second round of the 2022 NFL Draft, the initial move was met with skepticism. It’s not that the Vikings didn’t have a clear need to improve the interior. Not at all. There were plenty who felt drafting a center or guard in the first round would have been a wise move.

The reason many had low expectations for Ed Ingram, the rookie out of LSU, is because of the organization’s recent history with investing valuable draft picks into the offensive line.

Fans saw Rick Spielman select Ohio State guard Wyatt Davis in the third round last year, and he didn’t see any offensive snaps as a rookie despite having a clear need to improve at right guard. Selecting Ingram was nearly a death knell for Davis, indicating the incoming regime didn’t have much faith in the 23-year-old’s development either.

But we shouldn’t judge Ingram based on past failures. He’s his own person, and the two situations are not the same. So far, Ingram’s proven that by running with the first-stringers, as the projected starting right guard. Whether he holds up in the regular season will be the real test, but he’s surpassed expectations so far, which is more than we can say for Davis.

Ingram’s been able to move bodies in space, looking like a force along the interior, which has been a major sore spot since Garrett Bradbury was brought on board in 2019. Maybe even having Ingram next to Bradbury to help chip defenders and take on extra blockers can help improve the former first-round pick’s effort as well. Fingers crossed.

Continuity and potential give OL unit a high ceiling

Credit to the Vikings over the years for recognizing one of their biggest areas of need and continuing to invest draft capital into the position. They’re now projected to have an entire starting five who have all been drafted in the second round or higher.

All five of them are 26 or younger, with O’Neill bringing the most experience to the group. O’Neill has already made the Pro Bowl, and chances are, the Vikings will have Darrisaw join him later this year. Maybe we even see Ingram join the crew in the future, but he has to get his feet wet before we reach that far.

Having four of five starters return should help this group look cohesive from the very beginning. The biggest weak point and question mark remains at center, but the Vikings believe they have enough depth with Chris Reed, Austin Schlottmann, and Wyatt Davis, who are all capable of taking snaps at the pivot as well.

If the line comes together as smoothly as we envision, there’s no reason the Vikings can’t be playing deep into January as they vie for a playoff spot.