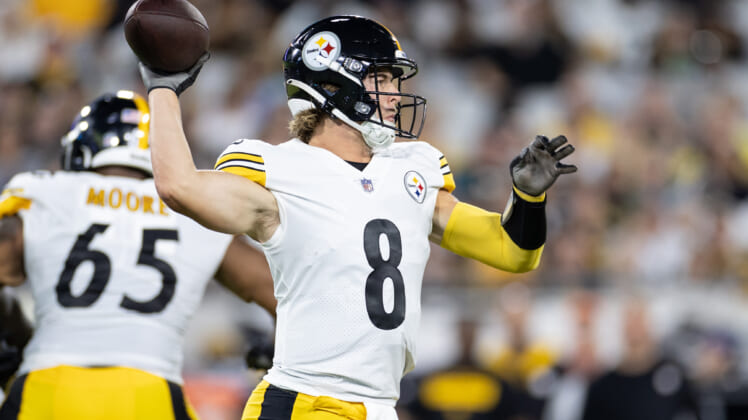 When NFL free agency opened up this past offseason, the Pittsburgh Steelers quickly struck a deal with former Chicago Bears and Buffalo Bills quarterback Mitchell Trubisky. At that time, it appeared he’d get the first chance to be the heir apparent to Ben Roethlisberger, but Kenny Pickett‘s doing his best to try and change Pittsburgh’s plans.

Somewhere lost in all this is Mason Rudolph, who continues to play well as the backup, but he’s never been seen as a viable starter throughout this preseason QB battle.

Instead we’ve seen a little bit of Trubisky, and a lot of Pickett as he makes the jump from college to the pros.

The prevailing thought had been for the Steelers to begin the year with the veteran, in this case Trubisky. Hoping he could do just enough on the back of an effective power running game mixed with a stout defense to help the Steelers stay in enough games to compete for a playoff spot in the AFC North.

That way Trubisky gets a legitimate chance, which is likely the exact reason why he felt the Steelers were the best fit for him in free agency.

Then Pickett came along. No one anticipated the rookie to look this polished through his first two preseason games, but the first-year pro is forcing some tough decisions to be made in Pittsburgh.

We caution against taking too much stock in preseason play against players who won’t generally be featured on Sundays, but Pickett’s play is becoming tough to ignore, or write off.

Still, has Pickett’s play caused Tomlin to consider starting a rookie quarterback over Trubisky, who has five years of NFL experience and 50 starts under his belt?

Not only are Pickett’s stats impressive, he’s displayed an ability to lead his team down the field, even in crunch time. So far Pickett’s led his team to a touchdown during a two-minute drill against the Jaguars, and he also led a game-winning drive in his first NFL preseason start.

He only played two series in Week 2 of the preseason, but maybe that’s because Tomlin had already seen enough? The coach may not admit it, he swears that was always the plan. We should find out who the Steelers plan to roll with in the next week or two, but it’s hard to overlook Pickett’s performance so far.

Turning back the calendar to the pre-draft process, Pitt’s Pickett emerged from a pack of contestants vying to become the first quarterback off the board. There were several players who some suggested could be a first-round prospect, with names such as Malik Willis, Matt Corral, Desmond Ridder, and more all linked and mocked in the first round.

But draft night came and went, and Pickett’s name was the only one we heard on day one.

After five seasons with the Pitt Panthers, few questioned whether the 24-year-old QB was pro-ready. Instead other concerns emerged. Perhaps the biggest knock was if Pickett’s 8 1/2″ hands were large enough to handle throwing an NFL football in the harshest conditions.

Though coach Mike Tomlin never seemed to buy into that talk, noting how Pickett did just fine playing in Pittsburgh during his college career.

Coach Tomlin raises some good points. Based on his play during the first two preseason games, Pickett’s hands have not been a factor. Will that change when the temperature drops, when rain, snow, and sleet start impacting the ability to grip the ball?

Maybe Pickett’s days will look much different once the weather flies, but for now, the Steelers may have found their QB of the future, and the local fanbase is already hooked.