One Pittsburgh Steelers beat writer believes that there are two clear scenarios for Kenny Pickett to eventually be handed the keys to the team’s starting offense in the regular season.

The Steelers were the only team in the 2022 NFL draft to make the leap and take a quarterback with their first selection in April. However, when the pick was read aloud by NFL Commissioner Roger Goodell, Malik Willis — the most highly touted prospect in the class — did not have his name read. Instead, the organization took local star Kenny Pickett with the 20th overall selection.

With Pittsburgh in transition, after team legend Ben Roethlisberger retired in the offseason, Pickett is the early choice to be the team’s next franchise signal-caller. However, the Steelers did sign former first-round pick Mitchell Trubisky and he is currently the team’s starter. Yet, many wonder how long that will last since the former Bears and Bills talent has not been overly impressive in camp.

Is Week 4 the perfect time for Kenny Pickett to become the Pittsburgh Steelers starter?

The Athletic’s Steelers writer Mark Kaboly says Pickett taking snaps at center in the regular season is not an if, but when scenario. And he believes there are two very specific points in the season where fans could see the 24-year-old take over the offense if Trubisky falters.

Both scenarios are logical since it would be optimal to give the young QB as much extra time as possible to work with the first team offense, and game plan for his first opposing defense. So that he can have as successful a first start as possible. 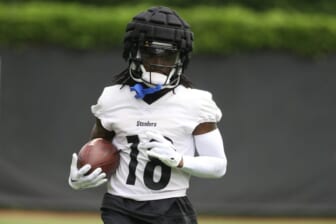 Confidence is key in every sport, and keeping Pickett’s high will be imperative. Since there will be a lot of pressure on him not only a starter in the NFL, but as a local product fans will be strongly rooting for.