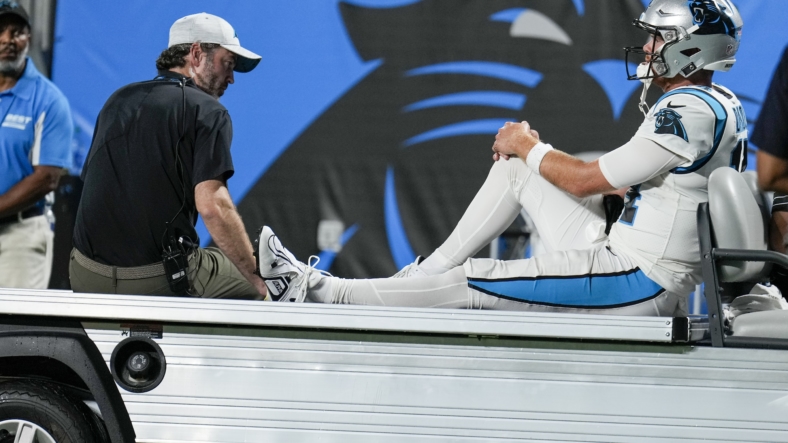 The NFL preseason action continued on Friday night, delivering four games, with eight different teams playing out their exhibition finale. We saw one of the best rosters in football get blown out with the Buffalo Bills losing 21-0 to the Carolina Panthers. The Dallas Cowboys took on the Seattle Seahawks with Geno Smith and Drew Lock still competing for the starting quarterback job.

Down in New Orleans, the Saints took on the Los Angeles Chargers in another high-scoring affair. Lastly, the New England Patriots traveled to the desert, pitting Bill Belichick up against his old protege Josh McDaniels, with the latter coaching the Las Vegas Raiders.

With plenty of storylines to take away from the day, here are the five biggest winners and losers from Friday’s NFL preseason Week 3 slate.

Already declared the starter, Baker Mayfield was given four drives to maintain some sort of groove as he prepares to take next week off before the regular season officially gets underway. Mayfield thrived. He led two scoring drives, which he capped off with a two-yard touchdown pass to D’Onta Foreman and a 19-yard TD to second-year receiver Shi Smith.

Mayfield ended the day completing 9-of-15 passes for 89 yards and the two touchdown strikes. He didn’t play in Week 2 but completed 4-of-7 passes for 45 yards in his debut with the Panthers.

Though he didn’t start strong with his team, Mayfield seems to have a firm grasp on the QB1 role in Carolina, especially after the injuries they’ve suffered at the position since his acquisition.

Every game has some good news, but unfortunately, the preseason always brings a few unforeseen events that kill the vibes. On Friday, we saw first-round rookie left tackle Trevor Penning have to be carted off during the New Orleans Saints preseason finale with a foot injury. Penning was projected to start, replacing Terron Armstead, who signed with the Dolphins this past offseason.

Newly-named Carolina Panthers backup Sam Darnold also had to be carted off with what looked to be an unsightly ankle injury.

We don’t know the severity of either injury, but no one ever wants to see the cart, especially in preseason action before the games even count. For Penning, he’s a rookie and maybe needed the extra reps to prepare for his first pro season. For Darnold, he’s getting ready to possibly sit his entire year on the bench, of course he wanted to play and put some strong film on tape.

Hopefully, they can both return to health sooner than later. Darnold’s injury may be a high-ankle sprain, which is great because the footage looked ugly.

The Seattle Seahawks wanted to get one final look at both of their possible starting quarterbacks with both Geno Smith and Drew Lock getting a chance to show what they can do on Friday. Being the veteran, Smith got the start, but he only got one drive, which led to a field goal.

Then it was Lock’s chance. On his first attempt, the pass was incomplete to Penny Hart. On the second, Lock seemed to either lock into his receiver too long or was just late to make the throw. Either way, it led to an interception for Dallas Cowboys defender Israel Mukuamu.

However the worst throw of the entire day may belong to Lock.

This is not what you want to see from someone competing for a starting role. This alone hands the job to Geno Smith.

Lock went on to throw two more interceptions. One that may or may not have been his fault. The ball tipped off his receiver’s hands, but maybe he shouldn’t have thrown the ball in the first place. On one hand, he placed trust in his receiver, on the other, he made a bad play.

He also had a touchdown toss, so it wasn’t all bad.

Winner: New Orleans Saints QB room looking as sharp as can be

There is no QB controversy in the Big Easy, which is perfect. It’s not hard to see all of their quarterbacks playing stress-free football. They all know their defined roles ahead of the regular season opener. Jameis Winston is installed as the starter, and he went 4-for-4 with 59 yards for an efficient day.

Capable veteran Andy Dalton may be one of the better backup QBs in football, and he proved it on Friday, with a perfect 5-for-5 day as well, passing for 73 yards.

Now-retired head coach Sean Payton was a big fan of 2021 fourth-round pick Ian Book, and he also balled out in Week 3. Book finished his day completing 11-of15 passes for 81 yards and a touchdown to help the Saints beat the Chargers. All three quarterbacks are locks to make the roster, and maybe Book even gives the Saints some second thoughts about keeping Dalton. Maybe he could bring back some future draft capital if they feel Book is ready for QB2 duties.

We’ve heard all preseason about the training camp concerns emanating from within the New England Patriots organization. Red flags were raised once Matt Patricia was seemingly installed as the offensive play caller and possible coordinator. Joe Judge is working with QBs, and Mac Jones is trying to expand upon his stellar rookie season. It’s a strange setup, but it’s what Bill Belichick is rolling with.

So far, the early returns, albeit only being preseason play, have been ugly. Jones hasn’t been able to get in a rhythm, and they’ve been unproductive on the scoreboard. He led four drives today and led his team to just three points. Jones also added this ridiculously bad interception, where he seemed excited to find an open man, delivering the laser to the opposing team.

With the Miami Dolphins expected to take a leap forward in addition to the Buffalo Bills being a tough out, the Pats will have to be on their ‘A’ game. We haven’t seen any glimpses of that this preseason, but it’s only exhibition play. It may all be overblown.