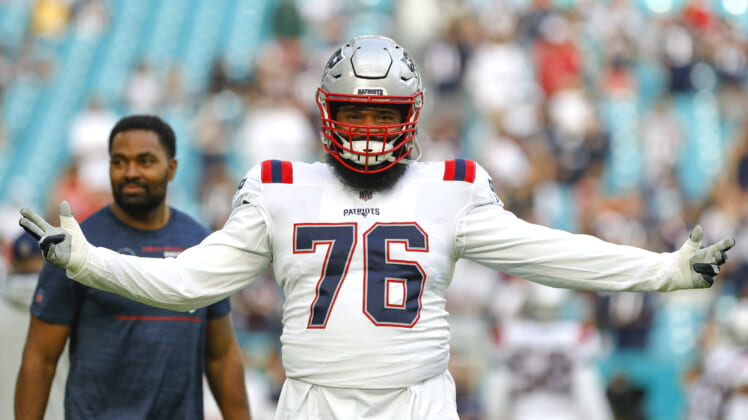 We’re just not sure if it is going to be with the Patriots. According to Albert Breer of Sports Illustrated, the Patriots have talked to several teams about trading Wynn ahead of the start of the regular season.

With Wynn slated to hit free agency next March, this can’t be seen as too much of a surprise. Bill Belichick and Co. like to move off impending free agents that don’t fit into their long-term plans rather than seeing them leave for nothing.

New England also has two players in Yodny Cajuste and Yasir Durant who could take over at right tackle should the team move off Wynn.

Despite some injury concerns and issues with consistency, Wynn is still only 26 years old. He’s also shown promise throughout his first few seasons after New England made the Georgia product a first-round pick in the 2018 NFL Draft. He can play both tackle spots and both guard spots. That won’t be lost on interested teams.

Best fits for Isaiah Wynn in a trade

As noted above, there’s numerous teams that would like to add Wynn to the mix. His flexibility and history of success add another layer to this. Back in 2020, Pro Football Focus graded Wynn out as the 11th-best tackle in the NFL when he was manning the blindside for Cam Newton.

Sure Wynn’s $10.4 million salary for the 2022 season could be prohibitive for some teams. But there’s nothing stopping an acquiring squad from extending the offensive lineman and lowering his 2022 cap number.

Las Vegas Raiders: This one seems to be rather obvious with former New England general manager Dave Ziegler and offensive coordinator Josh McDaniels now manning the ship in Vegas. Right tackle has been a major issue for the Raiders this season with former first-roud pick Alex Leatherwood bombing out. Perhaps, the Raiders can offer up Leatherwood and a mid-round pick to acquire Isaiah Wynn.

Tampa Bay Buccaneers: With center Ryan Jensen and guard Aaron Stinnie sidelined to injury, depth a long the offensive line is a major concern in front of Tom Brady. Why not go out there and bring in his former tackle to see if a change of scenery would do good? As it stands, Wynn would be a marked upgrade at left guard for the Buccaneers.

San Francisco 49ers: The continued injury issues for right tackle Mike McGlinchey coupled with an unproven interior of the offensive line could be a major deterrent in the 49ers’ hopes of hoisting the Lombardi. That’s especially true with a green Trey Lance under center. San Francisco would be smart to call up New England and see if something can be worked out for Isaiah Wynn

Dallas Cowboys: Dallas once boasted one of the better offensive lines in the NFL. However, retirements and injuries have decimated this unit. Right now, an unproven Terence Steele is slated to start at right tackle with rookie first-round pick Tyler Smith at left guard. Isaian Wynn would be an initial upgrade over both. The only issue here is Dallas’ cap situation after it was forced to move off multiple veterans in th offseason due to finances.