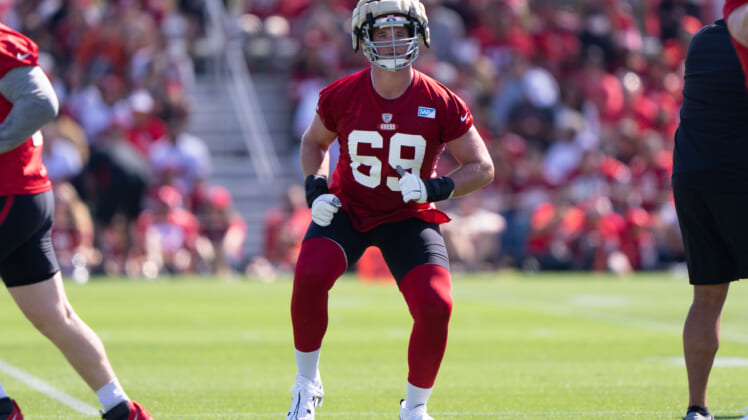 The San Francisco 49ers will be in a much better position if Mike McGlinchey is healthy for Week 1. The odds of that being the case have been dealt another blow.

McGlinchey did not take part in joint practices with the Minnesota Vikings this week because of irritation to his surgically repaired knee.

Ahead of their preseason finale with the Houston Texans on Thursday, 49ers head coach Kyle Shanahan confirmed McGlinchey will once again be held out of practice, according to Nick Wagoner of ESPN.

With McGlinchey still sidelined, Shanahan called Colton McKivitz their starting right tackle, which explains why he was held out of the Niners’ 17-7 win over the Vikings on Saturday. Almost all of San Francisco’s likely starters were rested for their second successive preseason triumph.

Mike McGlinchey still has time to recover for a Week 1 tussle with the Chicago Bears, for which the 49ers will be heavily favored regardless of whether he is on the field.

However, long term, his potential absence could pose huge problems for a remodeled offensive line tasked with protecting Trey Lance in the former third overall pick’s first season as a starter.

Mike McGlinchey and the experience factor

Though he has often received criticism for his performances and struggles to stay healthy since being drafted ninth overall by San Francisco in 2018, McGlinchey provides experience what is otherwise largely lacking up front for the Niners.

All-Pro left tackle Trent Williams is a top-10 player in the NFL, but beyond him and McGlinchey the Niners are set to roll with players who are getting their first crack at being starters.

Burford in particular has excelled as the interior offensive line has impressed in preseason despite its inexperience. Yet, he will surely feel more comfortable when the games matter if he has McGlinchey to his outside.

Mike McGlinchey is a high-floor player

That is not to say McKivitz cannot hold his own at right tackle. He did so when replacing Williams for the 49ers’ Week 18 win over the Los Angeles Rams – which clinched a playoff berth – last season. After a strong camp, he is all but sure of being San Francisco’s swing tackle.

But when healthy McGlinchey is a substantial asset to the Niners. He is better in pass protection than his critics suggest and his athleticism in space greatly improves the 49ers’ odds of running the ball successfully to the right side.

San Francisco might not get Williams-level play from McGlinchey, yet he gives the Niners a high baseline of performance that is not guaranteed with McKivitz, who has four starts in his career and just two at tackle.

The new starters on the offensive line will go through ups and downs, but they will be better equipped to handle them with both Williams and McGlinchey on the field. If McGlinchey cannot recover and is removed from the equation, it increases the risk of any struggles being magnified and Lance facing significant pressure off the right side of his offensive line.

Shanahan has proven he can coach around offensive line issues and Lance certainly has the skill set to overcome them. Still, not having McGlinchey on the field is an obstacle the 49ers would prefer to not have to navigate.