The Washington Commanders head into the 2022 NFL offseason searching for a new quarterback who can turn this team around. While the NFL Draft might be the likeliest path to landing a signal-caller, the organization might want something even better.

Holding the No. 11 pick in the 2022 NFL Draft, Washington would seemingly be in a strong position to land a high-end passer. Unfortunately, the consensus from NFL evaluators is that this year’s quarterback class isn’t particularly strong and lacks great upside.

While perspective could change after the NFL Scouting Combine, the 2022 Senior Bowl did little to inspire confidence in the 2022 draft’s quarterback crop. As a potential result, Washington seems to be thinking of even better alternatives to upgrade over Taylor Heinicke.

Following conversations with people around the NFL, ESPN’s Jeremy Fowler reports the expectation is Washington will prioritize a high-end quarterback this offseason.

“Many around the league expect Washington to comb the big-ticket quarterback market. The Commanders will most likely look at all options and won’t limit themselves.” 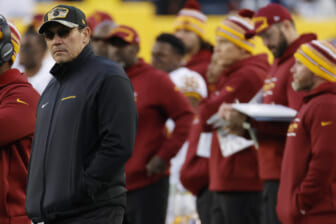 Also Read:
Assessing how the Washington Commanders can land a franchise QB using their trade capital

There are a few options available this offseason. The Houston Texans will be trading Deshaun Watson and there’s at least an outside chance Russell Wilson demands a trade. Meanwhile, multiple NFL teams have reported submitted offers to the Green Bay Packers for Aaron Rodgers.

The Commanders certainly have the assets to swing a huge trade. Three years of first-round picks and a willingness to deal Chase Young means Washington can make a competitive offer for anyone who becomes available.

However, Rodgers and Wilson are likely staying put. As for Watson, his legal developments suggest a trade might not happen until April. Furthermore, a franchise disciplined for a toxic culture that included numerous allegations of sexual misconduct towards women might want to avoid Watson.

Outside of those three options, Washington might have to settle for Carson Wentz or Jimmy Garoppolo. At that point, the Commanders might just be better off drafting a quarterback and hoping he surpasses expectations.