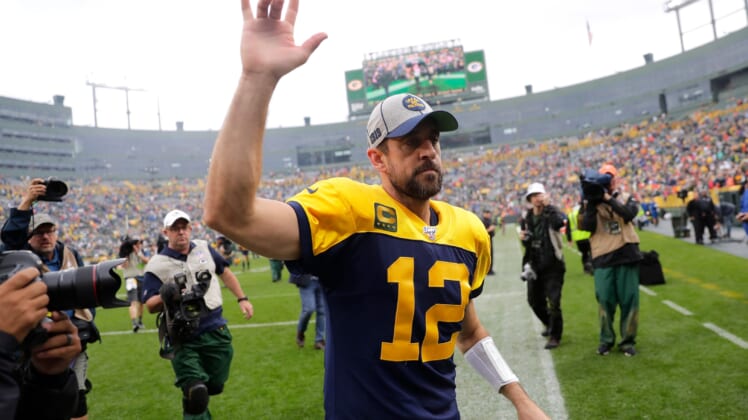 Two-time reigning NFL MVP Aaron Rodgers has yet to make a decision about his future with the Green Bay Packers.

Rodgers initially set a deadline of earlier this week to inform Green Bay whether he’s going to return to the team in 2022, request a trade or retire altogether. Despite a cryptic social media post earlier in the week, Rodgers indicated recently that he still has not made a decision.

However, one could come here soon. According to ESPN’s Dianna Russini, Rodgers will be informing the Packers of his decision “soon.”

“Aaron Rodgers will be informing the Packers of his decision soon, per league sources. I’m told there are multiple teams with offers on the table but of course, nothing can happen until the Green Bay Packers allow a trade.”

Recent developments seem to suggest that there’s now a decent chance Rodgers will opt to remain with the Packers. He thanked the organization in the aforementioned social media post. Green Bay is also confident behind the scenes that Rodgers will be under center Week 1 to start his 18th season with the organization.

But the engimatic future Hall of Famer is a true wild card. There’s absolutely no telling what he’s going to do moving forward.

Teams already have Aaron Rodgers trade offers on the table

A more interesting twist in Russini’s report is that multiple teams already have offers on the table for Green Bay to consider. If Rodgers does indeed request a trade, something could end up getting done in short order.

Right now, the Denver Broncos are favored to land Rodgers should he ask out. They just hired former Packers offensive coordinator Nathaniel Hackett to be their head coach. General manager George Paton has been chasing after Rodgers for some time now.

As you can see, Rodgers would be an upgrade for pretty much any team in the NFL. There would be absolutely no limit in the number of interested teams. That could include the San Francisco 49ers, who are also one of the favorites to land the future first ballot Hall of Famer.

Right now, there are currently 10 teams with enough projected cap room to take on what would be a $27.5 million hit by acquiring Rodgers.

This would leave the likes of the Miami Dolphins, Denver Broncos, Indianapolis Colts, Washington Commanders and Pittsburgh Steelers as teams with enough cap room and a need at quarterback.

Of course, other squads can make enough roomm to add Aaron Rodgers to the mix. San Francisco would save north of $24 million by trading Jimmy Garoppolo. For Kyle Shanahan and Co., it would be all about the lack of draft capital to offer up Green Bay and the team’s belief that 2021 No. 3 pick Trey Lance is ready to take over.

As for the Broncos, they are currently roughly $40 million under the cap and have the trade assets to offer up Green Bay should Rodgers request a trade.