Said cap is an increase of roughly $26 million from the 2021 campaign. This puts a lot of teams in great positions to be active on the NFL free agent and trade markets.

Carolina Panthers have most cap space in NFL

Congratulations. The Carolina Panthers have reached the pinnacle, having the most cap space in the NFL. Unfortunately, unlike many other teams who have spent this offseason, the Panthers still don’t have a better QB than they had in 2021, rolling with Sam Darnold. However, this is unlikely to be the case by Week 1. The question is, do they turn to Baker Mayfield (who isn’t interested), Jimmy Garoppolo, or the 2022 NFL Draft?

It’s been an incredible climb after the Saints started free agency needing to carve out space just to retain Jameis Winston for 2022. Now that they’ve done that they can keep adding to this roster. Marcus Maye was a good grab, but losing Terron Armstead won’t make this offense any better. We’ve yet to see them do much of anything to improve their scoring attack, which is a large concern after Sean Payton resigned. 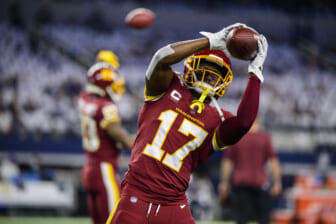 Moving off Carson Wentz helped Indy when it comes to the NFL salary cap. Acquiring an upgrade in Matt Ryan while being able to restructure his contract was also a coup for general manager Chris Ballard.

With Ryan and another Pro Bowler in that of Yannick Ngakoue in the mix, these Colts still have enough cap room to add at positions of need. That includes wide receiver and cornerback.