It’s already been a busy offseason for the Washington football franchise on many fronts. The organization dropped Football Team from their official name, making this a Washington Commanders mock draft instead. Some like the new name, some hate the change, but it’s here to stay.

Like it or not, Carson Wentz is also now in the mix, which checks off the biggest question mark of the offseason, but there are still other areas Washington must address. A No. 2 receiver, another starting cornerback, safety, linebackers, and possibly running back are all needs. For now, let’s take a look at the draft picks the Commanders already have.

Now that we know the picks, let’s dive into our 2022 Washington Commanders mock draft.

Like any team that missed the playoffs, the Commanders’ team needs can’t be addressed with one or two moves.

Of course, there are several ways to improve. The team could look to trade up for the top prospect on their draft board, but staying right where they are at No. 11 should allow a day one contributor to fall right into their laps.

With general manager Matin Mayhew having found their quarterback, we’re projecting a cornerback in the first round of the Washington Commanders mock draft. A case could be made for a top receiver to help Wentz in his first season in town, but the Commanders arguably have bigger needs on defense and a top-rated prospect just happens to be available.

Having allowed the most passing TDs during the 2021-22 season, Washington still needs to address their needs in the secondary this offseason. Derek Stingley Jr. has displayed shutdown corner ability at LSU, never shying away from traveling with the top receivers.

Coming from a football family, Stingley has the pedigree, is overly athletic, and has incredible ball skills. There’s no reason why he won’t be a top pick in the 2022 NFL Draft. If he’s still available, the Commanders shouldn’t think twice about adding one of the most talented players in the class. 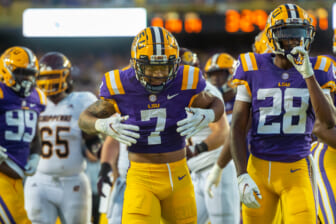 There are several routes we could take in the second round of our Washington Commanders mock draft. With a flawed Wentz under center, they need a better supporting cast. Terry McLaurin, Curtis Samuel and Antonio Gibson are great starting points, but they need another option who can win outside.

With two smaller speedsters in Scary Terry and Samuel, the Commanders could look to add more size to the receiver room, competing with Antonio Gandy-Golden and Cam Sims. North Dakota State’s Christian Watson at 6-foot-5 fills the need. Oh and he’s also fast as hell, having run a 4.36 40-yard dash at the scouting combine. You can never have enough speed, which only adds to the explosiveness that could be possible from Scott Turner’s offense in 2022.

Related: Predicting the fantasy football sleepers and breakouts for 2022