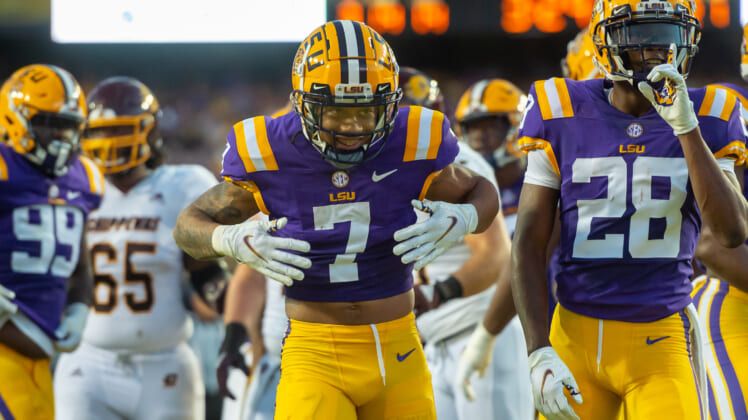 Two years ago, Derek Stingley Jr. was holding his own in LSU practices covering Ja’Marr Chase and Justin Jefferson. On Wednesday, the 2022 NFL Draft prospect had his pro day, which was his first chance to show what he can do in front of pro football scouts, coaches, and executives during the pre-draft process.

Having missed the NFL Scouting Combine while recovering from a Lisfranc injury suffered during the season, evaluators got their chance to see the top corner in action after playing just 10 games the past two seasons with the Tigers. How did the 20-year-old top cornerback prospect fare?

While Derek Stingley Jr. wasn’t the only prospect working out at LSU’s pro day, his workout was the most anticipated of the group. In turn, every team wanted to get a look at Stingley and other draft-eligible Tigers prospects in attendance.

Stingley was extremely impressive in all facets of the workout.

Stingley Jr. came into the pre-draft process as a potential blue-chip prospect, but teams had questions about his health and some inconsistency that showed up in college. Dominant as a freshman, we didn’t see that same effort out of Stingley Jr. the past two seasons as he fought through injuries.

This workout won’t do anything to erase the consistency questions, but Stingley’s pro day numbers show he ranks among the best athletes who performed at the combine, which at least shows he can hang.

In a cornerback-rich draft class, Stingley solidified his status as a potential top-10 pick in April. Many draft analysts rank Cincinnati’s Ahmad ‘Sauce’ Gardner ahead of Stingley Jr. and this workout won’t suddenly change that ideology as much as it strengthens his case to be the second cornerback to hear his name called on April 28.

There are several teams with a strong need for a potential shutdown, No. 1 cornerback to add atop their depth chart. As many football minds love to repeat, you can never have enough cornerbacks. There isn’t a team in the first round that couldn’t benefit from adding Stingley Jr. to their roster next season.

Aside from top-notch athleticism, what can Stingley bring to the NFL in 2022?

Any team preparing or hoping to land the talented corner is getting a player who can step in and start immediately, potentially as the best coverage defender in the organization from day one. Stingley Jr. has shown an ability to perform at an elite level even as a freshman in college when he intercepted six passes and deflected 21 more.

He has the quickness to recover from mistakes and the ball skills to capitalize once he gets there, giving him true ballhawk upside. Tackling isn’t a strength, where he’s had some struggles in space, but it’s something he can work on at the next level as he gains experience.

It shouldn’t matter what scheme he lands in as a pro, Stingley Jr. can thrive in zone and man coverage and has incredible footwork. If he can stay on the field, Stingley Jr. could easily become one of the very best cornerbacks in football within just a few years. There’s a good chance he doesn’t make it out of the top-10.