Trevor Lawrence was ‘Captain Checkdown’ in 2021 according to PFF 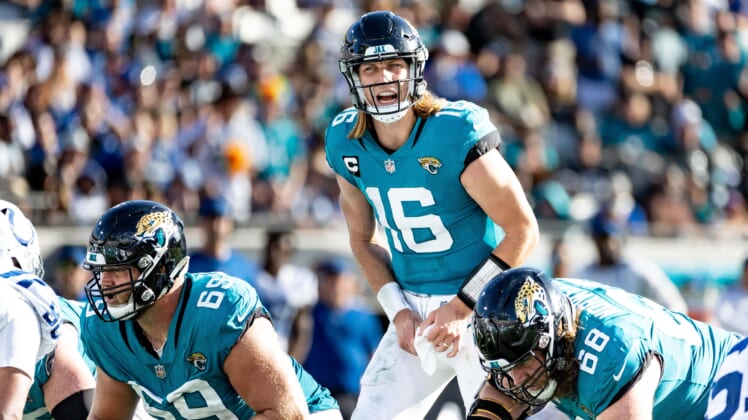 Welcome to the NFL, where every fanbase calls their quarterback ‘Captain Checkdown’ after seeing a conservative approach that comes up short of the first down.

Yet, to be fair, there can be only one true Captain, and according to Pro Football Focus, that title belonged to then-rookie quarterback Trevor Lawrence in 2021.

Courtesy of PFF, we have more data than just Lawrence’s checkdown rate from last season. Let’s dive in.

According to PFF’s data, Trevor Lawrence threw the checkdown pass on 11.3% of his pass attempts a year ago, this was nearly a full two percentage points more frequent than the next starter on the list, Derek Carr, who used the checkdown on 9.5% of his dropbacks.

It’s hard to argue either’s approach from last season. Lawrence was a rookie seeing his first playing time at the next level and Carr’s effort took his Las Vegas Raiders to the playoffs, but the data is still fascinating.

It should be noted, this data is compiled using the past two seasons of play, for which rookies obviously only have one year of analysis.

Here’s the full list of current starters, as shared by Sam Monson of PFF.

Chances are Lawrence’s checkdown rate won’t be above 10 percent now that he has a stronger receiving corps to stretch the field, in addition to a stronger support staff in 2022. The same goes for Mac Jones, his checkdown frequency may decrease a bit as he gains experience, but maybe not as much as Lawrence’s, depending on their aggressiveness without Josh McDaniels.

Meanwhile, Daniel Jones graded as the best deep ball passer in 2020 according to Nick Shook, maybe we’ll see him air it out more in Brian Daboll’s system instead of utilizing the checkdown so frequently.

Jalen Hurts had lowest checkdown rate from past two seasons

Naturally, since PFF provided the data for the highest checkdown rate, they also had the numbers for the lowest rate.

Surprisingly, a player few would consider to have a big arm, Jalen Hurts, actually had the lowest checkdown rate from the past two years.

Perhaps this is due to his added athletic abilities, knowing he can take off and have just as good of a chance of picking up extra yardage with his feet.

Here’s the data showing current starters with the lowest checkdown rate from the past two seasons, per PFF.

Tua Tagovailoa coming in at second also comes as a surprise, as the narrative surrounding him since Tyreek Hill has primarily been focused on his inability to go deep.

Meanwhile other cannon-armed QBs such as Patrick Mahomes and Josh Allen are no surprise here.

While fans want their quarterback to be found on the lowest frequency of checkdown passes, they’re not necessarily a bad thing. Sometimes a QB knows when the checkdown is their best option of getting into better field position, or just avoiding a bad mistake altogether.

Now the next time you hear someone say this or that quarterback always throws checkdown passes, you can check the data to see just how accurate this statement may be.