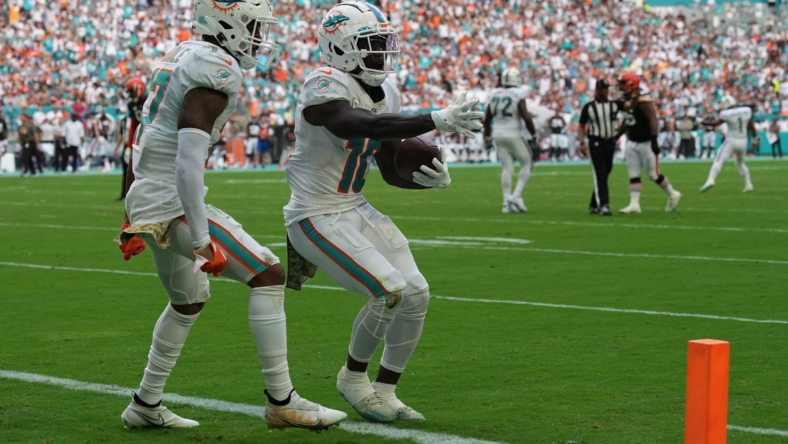 In a list that will be updated weekly throughout the 2022 season, we give you our NFL wide receiver rankings heading into Week 12.

Unfortunately, QB issues in Cleveland are also a problem here. Cooper was targeted just three times in a Week 10 loss to the Miami Dolphins. Though, he did rebound by catching eight passes for 113 yards with two touchdowns against the Buffalo Bills this past Sunday. It has Cooper as a firm presence in our NFL wide receiver rankings heading into Week 12.

Olave has been one of the few bright spots for an otherwise below-average Saints team this season. The Ohio State product is coming off his third 100-yard game of the season against the defending champion Los Angeles Rams in Week 11.

Thus far this season, Olave is on pace for 82 receptions and north of 1,200 yards. Those are some pretty remarkable numbers from a dude who plays a position that typically sees players struggle transitioning from college to the pros.

This recently-extended pass-catcher played a huge role in Washington’s Week 10 upset win over the previously undefeated Eagles. McLaurin caught 8-of-11 passes for 128 yards in the victory.

It’s just the continuation of a brilliant five-game stretch from the Ohio State product after some initial struggles this season. McLaurin makes a long-awaited return appearance in our NFL wide receiver rankings after having caught 28 passes for 425 yards during that five-game span.

Samuel is being impacted by both his inconsistencies and the plethora of weapons San Francisco has at its disposal on offense. He’s put up just one 100-yard receiving performance and has already dropped seven passes on 69 targets. That’s not great.

What we do know is that the All-Pro remains an elite weapon with the ball in his hands. That included a brilliant touchdown run in a blowout win over the Arizona Cardinals this past Monday. We’re not going to see Samuel put up the same numbers in 2022, but he remains one of the top all-around NFL wide receivers.

After some initial struggles, Lamb has picked it up big time recently. That included Lamb catching 11 passes for 150 yards and two touchdowns in a Week 10 loss to the Green Bay Packers.

Through 11 weeks, Lamb is on pace to put up career-highs in receptions (99), receiving yards (1,277) and touchdowns (eight). More recently, Lamb has caught 30 passes for 410 yards with three touchdowns over the past five games. He’s also posting a low 4.3% drop rate compared to 7% over his first two seasons.

Fresh off a record eight consecutive 1,000-yard performances to open his career, Evans continues to do his thing with Tom Brady tossing him the rock in 2022. He’s been targeted double-digit times in three of the past four games, coming away with 25 receptions for 313 yards in the process.

However, Tampa Bay’s inability to get the ball down the field has impacted Evans big time. He’s also averaging what would be a career-low 2.7 yards after the catch. This impacts Evans some in our most-recent NFL wide receiver rankings heading into Week 12.

Brown is coming off ho-hum 126-yard performances over the past three outings. Despite this, he has proven himself as one of the top NFL wide receivers this season. He has four games with 85 receiving yards or more, including a 156-yard, three-touchdown outing against the Pittsburgh Steelers back in Week 8.

However, the stud youngster is coming off an absolutely brilliant two-game run that saw him catch 15 passes for 262 yards and four touchdowns before going down with a hip injury. The hope here is that Chase is able to return at some point soon.

After a record-breaking 2021 campaign for the Rams, this reigning NFL Offensive Player of the Year and Super Bowl MVP has struggled to an extent catching passes from Matthew Stafford this season.

Even though he’s on pace to put up some otherworldly numbers once again, it must be noted that Stafford has thrown a resounding four interceptions when targeting Kupp. It’s more about Stafford forcing the ball to his top target without any other real receiving threats. Now that Kupp is on injured reserve with an ankle injury, there’s concern he’s played his last game this season. That’s a damn shame.

After serving a six-game suspension, Hopkins is up to his old tricks as one of the elite pass-catchers in today’s NFL.

Even after missing those first six games, Hopkins finds himself on pace to catch 99 passes for 1,071 yards. That’s simply incredible. Though, his four drops on 58 targets this season bests his total from the previous two years combined.

Despite the Raiders’ ugly 3-7 start to the season, Adams continues to prove himself as one of the top pass-catchers in the league. The All-Pro caught seven passes for 141 yards, including a walk-off touchdown in overtime, against the Denver Broncos last week.

Over the course of the past three games, Adams has hauled in 26 passes for 413 yards and five touchdowns. He’s now posted his sixth career double-digit touchdown season and is on pace for nearly 1,600 yards. His recent performance also has Adams ascending our NFL wide receiver rankings heading into Week 12.

Waddle has been even better as a sophomore, providing improved quarterback Tua Tagovailoa with another electric target. He’s coming off a five-game span in which the youngster has caught 27-of-36 targets for 474 yards with three touchdowns. Waddle now finds himself on pace for 1,500 receiving yards this season.

Diggs has picked it up again in 2022, finding himself on pace to catch 120 passes for 1,700 yards and 15 touchdowns. He’s also averaging a robust 4.5 yards after the catch with Josh Allen tallying a 127.7 QB rating when targeting him.

The 2022 season has been about as good for Mr. Jefferson. After some struggles early in the season, he returned to form by catching 51 passes for 814 yards during a six-game span before being shut down in Minnesota’ pathetic blowout loss to the Cowboys last week. Despite this, Jefferson remains one of the top figures in our updated NFL wide receiver rankings heading into Week 12.

This has been taken to a whole new level in Hill’s first season with Miami. How good has the All-Pro been through 10 weeks? He’s now on pace to break the single-season NFL record with 2,085 yards. That’s just insane.