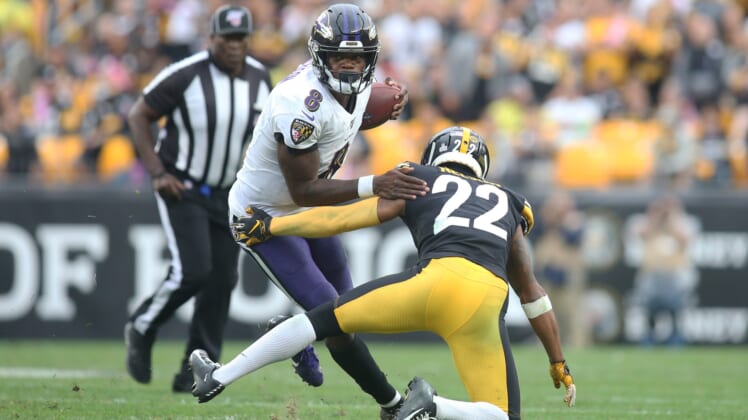 NFL Week 12 was supposed to kick off with the biggest division rivalry game on the schedule in prime time. However, the Pittsburgh Steelers and Baltimore Ravens game has been postponed from the final showdown on Thanksgiving Day to the weekend due to COVID-19 issues. Despite the letdown and underwhelming holiday doubleheader, there’s no lack of intrigue thereafter.

Meanwhile, the Seattle Seahawks and Philadelphia Eagles will close out the Week 12 slate in a game Carson Wentz and Co. need.

It’s in this that we give you the NFL Week 12 schedule with game-by-game predictions.

At 7-3 on the season, Buffalo’s Week 11 bye could not have come at a better time. The team’s defense has been torched over the past two games, giving up 872 total yards 66 points. Thankfully, Josh Allen continues to lead an offense that’s averaging nearly four touchdowns per game.

As for the Chargers, it’s been a combination of hope as it relates to young quarterback Justin Herbert and more struggles in close games. The rookie quarterback has accounted for 25 touchdowns and six interceptions and was brilliant in a Week 11 win over the Jets. Unfortunately, the Chargers have dropped seven of 10 to open the season with all seven losses coming by one score. You can do the math here.

Indianapolis’ Week 10 blowout win over the Tennessee Titans has helped the team emerge into a potential conference title contender. Its comeback win over Aaron Rodgers and the Packers this past Sunday add even another layer to that. Philip Rivers was brilliant for the now 7-3 Colts, throwing for nearly 300 yards and three touchdowns in an overtime victory. Unfortunately for Indianapolis, it will be without Jonathan Taylor and several other stars due to COVID-19.

From a Titans perspective, this is nearly a must win. Tennessee has lost three of four since a 5-0 start to the season. Ryan Tannehill has seen his production decline. Meanwhile, The Titans’ once-heralded defense is giving up north of 26 points per outing. Things are not aligning for this to change in Week 12.

Seemingly righting the ship into playoff contention, Minnesota had won three consecutive games heading into a Week 11 outing against the hapless Chargers. Boy, things took a turn in Minneapolis. While Kirk Cousins continued playing great football, his defense let the team down in a big way. That included a game-winning 11-play, 61-yard touchdown-scoring drive engineered by Cowboys quarterback Andy Dalton.

Things were going in the opposite direction for a Panthers squad that has lost five consecutive. Teddy Bridgewater and Christian McCaffrey remain banged up in the backfield. Meanwhile, Carolina’s defense has given up a whopping 79 points over the past two games. That changed big time in Week 11 during a shocking 20-0 shutout win over the Lions. However, this could be an exception to the rule given how many injuries Detroit was dealing with on offense. Expect things to return to normalcy here with Minnesota getting a much-needed win.

Update: Mike Glennon to start at QB for the Jaguars

The Browns are an interesting case study. There’s games that show this team to be among the most well-rounded in the NFL. Its offense has dominated at times. However, there’s also a certain level of inconsistency. Cleveland has scored 10 points or less four times. In their other six games, the Browns are averaging north of 32 points. Now at 7-3 following Sunday’s win over the Eagles, these Browns are on a roll.

Expect that to continue Week 12 against a reeling Jaguars squad that has lost nine consecutive games and is yielding an average of 30 points this season. Embattled head coach Doug Marrone might have Jacksonville playing more competitive ball. But that won’t be the case Week 12.

Update: Brandon Allen to start at QB for Bengals

Just brutal. That’s the best way to describe the season-ending knee injury rookie No. 1 overall pick Joe Burrow suffered for his Bengals in Week 11. Burrow has already announced he’s lost for the season. It’s a major blow for a Bengals squad that has been competitive this season.

On the other hand, most expected second-year Giants signal caller Daniel Jones to take his game to the next level after a solid rookie campaign. In no way has that come to fruition. Jones has his Giants at 3-7. He’s thrown eight touchdowns compared to nine interceptions while putting the ball on the ground seven times. That’s just not going to cut it. Despite this, it’s going to be hard for the Bengals to rebound after what we saw in Week 11.

After dropping four consecutive earlier this season, New England had righted the ship to an extent. It won two consecutive heading into Week 11’s outing against the lowly Houston Texans. Unfortunately, the Pats previous stout defense was ripped apart by Deshaun Watson. It now has the Patriots at 4-6 and headed toward irrelevance in the AFC Playoff race.

On the other hand, these Arizona Cardinals continue to struggle on defense despite a solid performance on the other side of the ball by Kyler Murray. In fact, Arizona is yielding an average of 31.5 points over the past four games. That’s going to be the difference in an upset Patriots home win in Week 12.

Miami sat at a surprising 6-3 after having won each of its previous five games prior to a Week 11 date with a struggling Broncos team. Tua Tagovailoa had performed well since he replaced Ryan Fitzpatrick under center. In no way did any of this come to fruition against Denver. Tua tallied just 50 net passing yards and was sacked six times before being benched in an ugly 20-13 loss.

As for the Jets, they sit at 0-10 on the season and have already been eliminated from playoff contention. That came after the team was absolutely torn apart by Chargers rookie quarterback Justin Herbert in a Week 11 loss. This game shouldn’t be close with Miami rebounding big time against the worst team in the NFL, even with Tagovailoa doubtful to play.

Despite some major COVID-related issues throughout the season, Jon Gruden has his Raiders at a surprising 6-4. That has included stunning wins over the likes of the New Orleans Saints and Kansas City Chiefs. Unfortunately, Las Vegas fell just short of sweeping the Chiefs in a 35-31 loss to this past Sunday. That hurt big time.

Things are going much better for the Falcons, too, since they fired Dan Quinn. While Atlanta has no reasonable expectation of playoff contention moving forward, it has won three of five. Matt Ryan is now making sweet music with Julio Jones after some initial struggles. Atlanta can still score without Jones, but not at the level needed to win a shootout.

With Drew Brees on injured reserve, the Saints’ decision to start Taysom Hill over Jameis Winston has been under a microscope. Sean Payton and Co. have committed to Hill over the long term to be Brees’ heir-apparent. Whether he’s worth that status remains to be seen.

Those questions were answered and then some in a blowout win over the Falcons in Week 11. Hill combined for nearly 300 total yards and two touchdowns, proving skeptics wrong. The Saints’ defense was all over Matt Ryan in this one. New Orleans was already the favorite under normal circumstances. With the Broncos starting a wide receiver at quarterback, this should be an ugly blowout.

Thirty-one. That’s the number of 49ers players currently on various injured lists during what has been a disastrous season for the defending NFC champs. The good news? San Francisco will be getting the likes of Raheem Mostert, Deebo Samuel and Richard Sherman back for this post-bye week outing.

The better news for San Francisco? It has the Rams’ number. These 49ers have won three consecutive against Jared Goff and Co. Despite the Rams’ status as a conference title contender and heavy favorite heading into Week 12, I am going with a major upset here.

Patrick Mahomes against Tom Brady. The new face of the NFL against the old guard. Obviously, the 7-3 Buccaneers would love to make a statement against the defending Super Bowl champions at the site of the big game scheduled for February 7.

Will it happen? I am not too sure. Mahomes is playing out of his mind right now. The record-breaking quarterback has accounted for 29 total touchdowns against two interceptions. That’s simply amazing. He will also make a major difference as the Chiefs take out Tampa Bay as small road favorites.

This seven-point spread doesn’t make much sense. Despite struggles this season, the injury Nick Foles suffered back in Week 10 will have wide-ranging ramifications for the Bears. With Foles sidelined, Mitchell Trubisky will slide back under center. This is it for the Bears and Trubisky. If he struggles in a losing effort, Chicago will be three games back in the NFC North and this organization will move on from him after the season.

As for the Bears as a whole, they have scored the second-fewest points in the NFL despite boasting a 5-5 record. The team has also lost four consecutive. This is going to be a run away win for MVP candidate Aaron Rodgers and his Packers on “Sunday Night Football.” Take that to the bank.

Seattle’s huge Week 11 win over the Arizona Cardinals has the team thinking NFC West title and Super Bowl contention. This, despite the fact that Pete Carroll’s defense ranks in the bottom five of the NFL in scoring. Seattle’s success has been more about the stellar play of Russell Wilson and the connection he’s found with second-year receiver D.K. Metcalf.

As for the Eagles, it’s been a season if disaster in Philadelphia. Carson Wentz continues to make dumb mistakes on a near never-ending loop. Head coach Doug Pederson is clearly on the hot seat. Despite this, Philadelphia heads into Monday night in first place. While that might not change here, don’t expect Wentz and Co. to pull off the upset win.

Now four games up on Baltimore, Ben Roethlisberger and his Steelers can pretty much clinch the AFC North title with a Week 12 win. Big Ben continues to play great football. He’s thrown 24 touchdowns against just five interceptions on the season. Meanwhile, Pittsburgh’s defense has yielded the third-fewest points in the NFL. Talk about domination.

The same thing can’t be said about a suddenly struggling Ravens squad that has lost three of four following a brutal overtime defeat at the hands of the Titans in Week 11. With Jackson out and Baltimore depleted on both sides of the ball, the Steelers should roll on Tuesday night.

At 4-6 on the season, Detroit is battling for playoff relevancy. The team has won three of six since a 1-3 start to the season. Unfortunately, these good feelings gave way to a brutal Week 11 performance that saw Detroit shut out by a previously struggling Carolina Panthers squad by the score of 20-0.

On the other hand, Houston put up a beautiful performance in a 27-20 win over the New England Patriots. It’s a game that saw Deshaun Watson break out to the tune of 380 total yards and three touchdowns. The Texans are now a respectable 3-2 since firing Bill O’Brien. Expect that to continue Thanksgiving Day in Detroit.

It’s pretty hilarious to look at. Both Washington and Dallas are 3-7 on the season. Despite this, their rivalry game on Thanksgiving will take on huge significance in the horrible NFC East. Heck, these two squads are just one game behind Philadelphia in the win column. Think about that for a second.

Alex Smith has Washington driving the ball up and down the field on offense after taking over for an injured Kyle Allen under center. Meanwhile, Andy Dalton returned to action in Week 11 after missing multiple games due to both a concussion and COVID-19 protocols. It resulted in a shocking win over the Minnesota Vikings. Expect the Cowboys to continue that momentum on a short week.