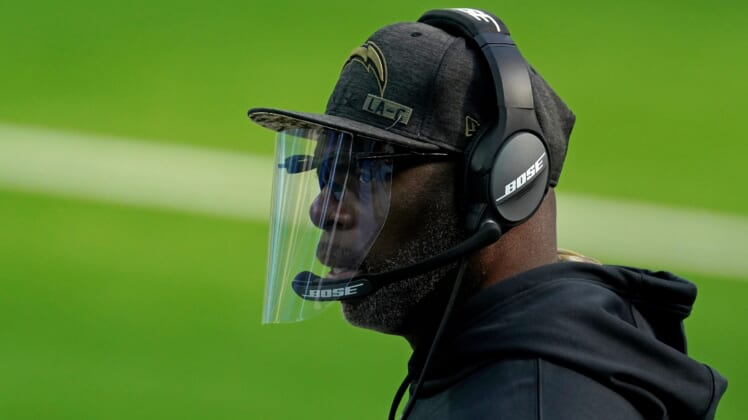 Now in his fourth season as the Los Angeles Chargers’ head coach, Anthony Lynn has been given every opportunity to succeed. At every single turn, his team has struggled living up to its talent level. The coach himself has also struggled from an in-game strategy standpoint. Following Los Angeles’ brutal loss to the New England Patriots, it’s time for the team to fire Mr. Lynn.

Here’s the gist of this argument.

Ahead of Sunday’s game against the New England Patriots, reports suggested that Lynn was coaching for his job. Well, if that’s the case, he might not be in this role much longer. Los Angeles was absolutely humiliated by a then 5-6 Patriots team by the score of 45-0 in Week 13.

After playing well throughout his rookie campaign, Justin Herbert struggled big time. That included two interceptions. Meanwhile, the Chargers’ defense yielded 165 rushing yards to go with two touchdowns on the ground from Cam Newton in their most lopsided loss in franchise history.

Now at 3-9 on the season, Los Angeles is officially eliminated from playoff attention. As I have noted multiple times in the past, it’s now time for the team to move on from Anthony Lynn. What else do the Chargers need to make this decision?

Following the Chargers Week 12 loss to the Buffalo Bills, they sit at 3-8 on the season and completely out of the AFC Playoff race. It’s led to further speculation that Lynn could be out of a job. Lynn touched on that one day after the 27-17 defeat.

“It comes with the territory,” Lynn said Monday, via Gilbert Manzano of the Southern Cal News Group. “I control what I can control and I don’t worry about that. Of course, I like my job and I want to be here and I believe that I’m the right guy for the job and can turn this around. But that’s not my decision.”

That’s a company line response. But it doesn’t even come close to telling us the entire story here. The Chargers have been outcoached and outclassed at nearly every turn throughout their past 27 games. Just take this one instance against Buffalo as an example.

We don’t really need to explain what happened here. Down by 10 in the final minute, Los Angeles completed a hail mary. It then opted to run the ball on first down and third down. The game was over at that point without the team even having a chance at an on-side kick.

This is just the most-recent example of Lynn’s struggles over the past two seasons. And in reality, it should have led to a pink slip long ago.

It’s not a coincidence and Anthony Lynn deserves a lot of the blame.

In each of their past four one-score losses, the Chargers have given up 30 points or more. That very same span has seen Herbert tally 13 total touchdowns and two interceptions. He’s in no way to blame for these losses.

Rather, it’s all on Anthony Lynn. He’s the one common denominator. From Philip Rivers last season to Mr. Herbert this year. It’s the same old story. Lynn has been unable to get his Chargers over the hump in close games. In fact, the Chargers are 3-15 in said games since the start of last season. That’s not going to cut it.

As with quarterbacks, head coaches receive most of the blame when their teams are unable to come through in the clutch. It might not be a fair narrative. But these coaches knew what they were getting in to. Again, Anthony Lynn has been the one common denominator in Southern California. That’s been true since he posted 12-4 record in his second season. Since then, it’s been completely down hill.

That’s not the trajectory you want your team to be headed in under a coach who is now in his fourth season. From a pure won-loss perspective, Anthony Lynn has proven to be a failure with the Chargers.

That leads me to my final point.

For the sake of Justin Hebert, the Chargers must fire Anthony Lynn

As it is, the writing is on the wall for Anthony Lynn with the Chargers. Why delay the inevitable? We’ve seen how that’s worked with Adam Gase.