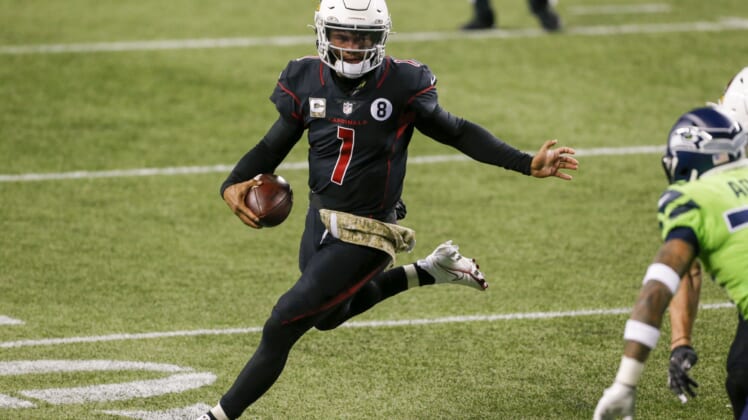 NFL injury report: We’re heading into Week 12 of the NFL season, with the fantasy football playoffs closing in and injuries piling up. Fantasy stars like Kyler Murray, Christian McCaffrey and Chris Carson are all on the NFL injury report this week and we’re here to keep you updated on the latest updates.

Fantasy managers will need to keep a close eye on their lineups and injury updates this week, thanks to the NFL Thanksgiving schedule. With only two games scheduled for Thursday due to the Ravens-Steelers COVID-19-induced postponement, news is surfacing about key players as kickoff approaches, with young Lions standouts Kenny Golladay and D’Andre Swift among the notable names who won’t be in action.

Let’s take a look at the latest news and updates from the NFL injury report for Week 12.

Before getting into the Thanksgiving Day fare, it’s worth focusing on one of the most dynamic signal-callers in the game first. No NFL quarterback is better at protecting his body than Murray. He is one of the league’s most unstoppable athletes and with 92 carries, Murray exposes himself to more hits than most quarterbacks. On Thursday Night Football, he took one of those rare, rough hits and suffered an AC joint sprain.

Murray was removed from the NFL injury report on Friday, clearing the way for him to start in Week 12. He’ll face New England’s defense, which ranks as the worst pass defense in DVOA this season. Murray and DeAndre Hopkins are both elite fantasy plays in Week 12.

We haven’t seen Carson play since Week 7, when he left an epic Sunday Night Football game with a mid-foot sprain. While there was initially hope that it would be a short absence, Seattle’s 5-foot-11 featured back has now missed four consecutive games.

Fortunately, that absence will come to an end in Week 12. Pete Carroll confirmed that Carson would return on Monday Night Football against the Philadelphia Eagles. Seattle also didn’t list him on the final injury report, clearing him to return. He’ll face a defense that entered Week 11 allowing 133 rushing yards per game.

When Carson returns to the backfield, expect the Seahawks to tailor their offense more to the running game. It’s great news for Carson and his fantasy managers, but the news isn’t all great from a fantasy perspective. Rashaad Penny is close to returning, and Carlos Hyde will get carries. Moving forward, Carson ranks as a top-16 running back for the rest of the season.

Joe Mixon went down with a foot injury in Week 6. Ever since, fantasy owners have constantly monitored the NFL injury report and hoped for positive news. Unfortunately, after missing four consecutive games, the Bengals are finally admitting the true severity of Mixon’s injury.

Cincinnati placed Mixon on IR before Week 11, ruling him out for Week 12 and Week 13. While there’s a chance he can return after the mandatory three-week IR stint, head coach Zac Taylor also refused to rule out Mixon missing the remainder of the season.

In Mixon’s absence, Giovani Bernard will be a mid-tier RB2 in PPR leagues. While upcoming matchups against the New York Giants and Miami Dolphins aren’t ideal, his volume and talent make him an appealing play.

When Ekeler went down with a severe hamstring strain in Week 4, early estimates suggested he’d miss six-plus weeks of action. He started running two weeks ago and steadily increased his activity since then. Ekeler, who also plays fantasy football, provided some noteworthy updates this week in an interview with The Athletic.

While the hamstring strain is the main cause of his absence, he also revealed the tendon on his femur pulled off the bone a bit. It all has required a lengthy rehabilitation process, but he expects to participate in seven-on-seven and individual drills this week.

Los Angeles activated Ekeler off injured reserve on Saturday and he is now expected to play against the Buffalo Bills. However, the team will be cautious and limit his snaps in his first game back. We’ll consider Ekeler a mid-tier RB2 for Week 12.

Zach Ertz has played through plenty of injuries during his NFL career and has regularly appeared on the NFL injury report. When he went down with a high-ankle sprain in Week 6, the Eagles immediately placed him on injured reserve.

Philadelphia designated Ertz to return from IR on Nov. 16, starting a 21-day practice window for him to either be activated or ruled out for the season. Earlier this week, Doug Pederson said Ertz is trending in the right direction to play in Week 12. However, Ertz is now expected to miss Monday night’s game. While he didn’t have a setback with his injury, Philadelphia wants to exercise caution with the Pro Bowl tight end.

Unfortunately, even when Ertz returns, he isn’t a safe top-10 tight end. When Dallas Goedert was sidelined, Ertz was averaging under 50 receiving yards per game. The Eagles recognize Goedert is the future at the position, so Ertz’s opportunities to shine might be over. With Ertz inactive for Week 12, Goedert is a top-five tight end.

Update: Julio Jones not expected to play in Week 12

We saw a familiar sight on Sunday, Julio Jones exiting the game with a hamstring injury. The All-Pro receiver took the field in Week 11 with a great matchup against the New Orleans Saints. Unfortunately, all the fantasy potential and Atlanta’s hopes for victory evaporated when he limped off the field with tightness in his hamstring.

Jones returned to the game in the fourth quarter, but left almost immediately. He will undergo an MRI on Monday, which will determine the severity of the issue. Even if the results are in Atlanta’s favor, there’s a real chance he doesn’t play in Week 12. Jones injured his hamstring in Week 1, then re-aggravated it the following Sunday.

It’s been an issue that has kept him out or limited him in multiple games and the Falcons (3-7) have no incentive to rush him back. On Monday, Raheem Morris said there is uncertainty around Jones’ status for Sunday’s game. Jones is questionable for Week 12 after being a limited practice participant this week. According to NFL Network’s Ian Rapoport, Jones is not expected to play on Sunday.

After suffering a knee injury in Week 11, Gurley won’t suit up for the Atlanta Falcons in Week 12. The team released its final injury report on Friday, and Gurley has already been ruled out, more than 48 hours in advance of the team’s matchup against the Las Vegas Raiders.

In Gurley’s absence, Brian Hill becomes the starter. The 6-foot-1 running back is averaging 4.3 yards per carry this season on 60 touches. He is also a capable receiver, hauling in 20 receptions for 111 receiving yards. A matchup against Las Vegas (112.2 rushing yards allowed per game) makes Hill an RB3 for Week 12.

It’s been a rough year for fantasy managers who spent the No. 1 overall pick on Christian McCaffrey. After suffering a high-ankle sprain in Week 2, McCaffrey didn’t return to the field until Week 9. Everyone loved watching his monster 151-yard, two-touchdown performance. Unfortunately, we learned 24 hours later that he suffered a shoulder injury.

McCaffrey was eventually diagnosed with an AC joint sprain, causing him to miss Carolina’s past two games. Unfortunately for fantasy owners, the timing could work out very poorly. While McCaffrey returned to practice this week, he will not suit up on Sunday. It’s likely an exercise in caution, with the Panthers heading into a Week 13 bye. Expect McCaffrey back for the fantasy football playoffs in Week 14.

There have been plenty of freak injuries this season, but Smith-Schuster suffered one of the most unusual on Sunday. Pittsburgh’s Pro Bowl receiver tweaked his ankle stepping on a penalty flag and didn’t return to the game.

The broadcast noted that the Steelers were cautious with Smith-Schuster and he could have returned if the score was close. Smith-Schuster also caught a bit of a break with the game being rescheduled. With Pittsburgh not playing until Tuesday, there is more time for Smith-Schuster to rest and rehab his foot injury. Given the risks of him being limited or the game being postponed, consider other options.

In terms of the fantasy pecking order among Pittsburgh’s receivers, we’d rank Smith-Schuster third. Diontae Johnson is coming off a monster game, with 12 catches and 111 receiving yards on a team-high 16 targets. Meanwhile, Chase Claypool found the end zone once again. We’d start both with confidence, even against Baltimore’s secondary, but might shy away from JuJu.

It’s been a frustrating season for Kenny Golladay. Before the year began, he was excited about having a healthy Matthew Stafford at quarterback. After leading the NFL in touchdowns (11) last season, Golladay was poised to do even bigger things in his contract year.

Unfortunately, things haven’t unfolded how he hoped. The 27-year-old has played in just five of Detroit’s 10 games this season and exited in the first quarter on Nov. 1. Golladay hasn’t played since Week 8 and he couldn’t even practice on Thursday or Friday before Week 11. Detroit didn’t practice on Monday, but listed its star receiver as a limited participant in its estimated practice report. It still feels unlikely that he will suit up on Thanksgiving against the Houston Texans.

With Golladay and Danny Amendola both likely out for Week 12, Marvin Jones Jr. becomes a high-end WR3. Houston’s secondary allows 252.4 passing yards per game. Meanwhile, with more targets coming his way, T.J. Hockenson is a top-10 tight end this week.

Swift landed on the NFL injury report with a concussion, and the Lions quickly ruled him out for Week 11. With Detroit set to continue its tradition of playing on Thanksgiving in Week 12, Swift had limited time to clear the concussion protocol, so it’s not much of a surprise NFL Network’s Ian Rapoport reported the rookie isn’t likely to suit up amid the quick turnaround for Thursday’s matchup with the Houston Texans

Everyone has been waiting for the Lions to let Swift loose as the featured running back. That moment seemed to arrive in Week 10, when Swift was named the starter over veteran Adrian Peterson and Detroit’s other young ball-carrier, Kerryon Johnson. After a stellar outing from the Georgia product (149 scrimmage yards, one touchdown), a new RB1 looked to be joining the fantasy ranks.

Sadly, the spark of hope for the Lions’ perpetually woeful rushing attack didn’t last for long. At this point, we could see a Peterson renaissance on Thanksgiving, or it’s also possible Johnson feasts on a bad Texans defense with whatever opportunities he’s afforded.

Due to Johnson’s superior upside as a pass-catcher and the higher likelihood Peterson will be used in short-yardage, goal-to-go situations, both backs carry either low-end RB2 or borderline flex streaming value in Week 12.