The game between AFC North rivals Steelers (10-0) and Ravens (6-4) was the marquee matchup on the U.S. Thanksgiving Thursday... 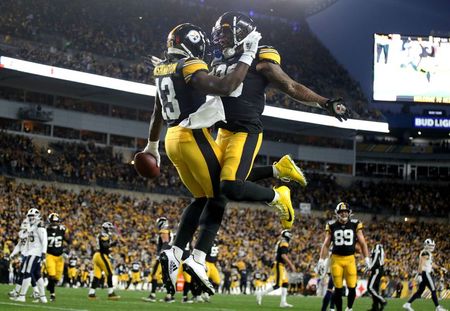 (Reuters) – The Baltimore Ravens’ Thanksgiving Day game against the unbeaten Pittsburgh Steelers has been moved to Sunday afternoon after several Baltimore players and staff tested positive for the coronavirus, the National Football League said on Wednesday.

The AFC North contest between the 10-0 Steelers and 6-4 Ravens was to be Thursday’s marquee matchup on the NFL’s three-game U.S. Thanksgiving Day schedule.

The NFL said on Twitter the decision was made out of an abundance of caution to ensure the health and safety of players, coaches and game-day personnel. The league later announced the game would be nationally televised on Sunday at 1:15 p.m. ET (1815 GMT).

The Ravens placed three players on their Reserve/COVID-19 list earlier this week. By Tuesday, five players and four staffers had tested positive for the novel coronavirus, according to ESPN.

The team said Wednesday that they had “disciplined a staff member for conduct surrounding the recent COVID-19 cases that have affected players and staff at the Ravens.” The staff member’s identity was not immediately clear and the team did not practice Wednesday.

The NFL’s Thanksgiving Day lineup, which was expanded from two games to three in 2006, is an American cultural tradition alongside pumpkin pie and mashed potatoes, with turkey-stuffed families retiring in front of the television each year to deliver blockbuster ratings.

“First the NFL takes away our bye week because another team can’t get their Covid situation together, now they take away our Thanksgiving primetime game for the same reason,” Smith-Schuster wrote on Twitter.

Previously, Pittsburgh’s Week 4 game was pushed to Week 7 due to a coronavirus outbreak within the Tennessee Titans organization, one of at least a dozen games postponed this season.

The league has repeatedly ramped up its COVID-19 safety protocols and this month unveiled a contingency plan for an expanded playoff pool if the pandemic forces outright cancellations.

With new COVID-19 cases and hospitalizations soaring across the United States, all teams adopted the league’s “intensive protocol” on Saturday.