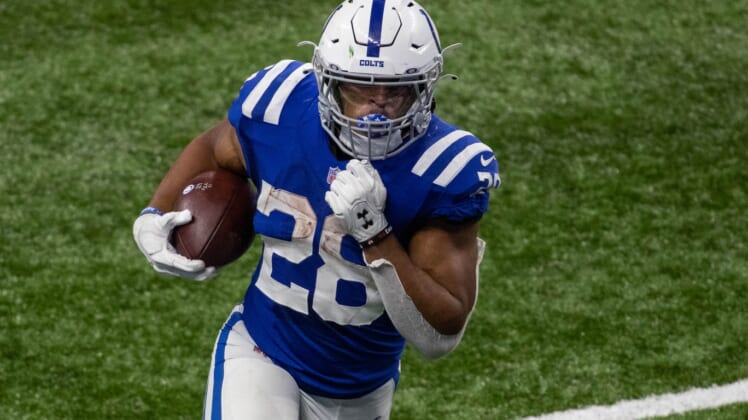 Colts news: Indianapolis Colts running back Jonathan Taylor will miss Sunday’s game against the Tennessee Titans after landing on the reserve/COVID-19 list.

Coming off the best game in his NFL career, the rookie running back was expected to have a huge rule in Week 12 in a pivotal AFC South battle. Instead, just 24 hours before the game, the Colts will be even more short-handed.

The Indianapolis Colts announced a series of roster moves Saturday. Among them, placing Taylor on the reserve/COVID-19 list and ruling out starting center Ryan Kelly for Sunday’s game.

Indianapolis was already going to be playing with a depleted roster in Week 12. All-Pro defensive lineman DeForest Buckner tested positive for COVID-19 earlier this week. He will be one of five starters missing, along with Taylor, Kelly, defensive tackle Denico Autry, and linebacker Bobby Okereke all ruled out for Sunday’s game.

Unfortunately, the timing also couldn’t be much worse for the Colts. They are tied with the Titans (7-3) for first place in the AFC South, and Sunday’s game will provide a crucial one-game advantage for one of these two rivals.

The absence of Jonathan Taylor and multiple defensive starters have significant fantasy implications. With the race for playoff spots heating up in leagues, we could see some matchup-winning performances in Week 12.

We’ll start with the fallout from Taylor’s absence. The biggest beneficiary is Nyheim Hines. After exploding for 114 scrimmage yards and two total touchdowns against the Titans on Nov. 12, he gets a chance to shine once again. We’d expect Indianapolis gives him at least 16 touches, with four of those coming via receptions. Hines will be a solid RB2 in PPR leagues for Week 12.

On the other side of the ball, Derrick Henry should feast on Sunday. While this would normally be a difficult matchup, with Indianapolis allowing the third-lowest yards per carry (3.5) in the NFL, things change with injuries. Missing multiple defensive starters, Henry should have a great shot at a 100-yard game in Indianapolis.

If the Colts lose on Sunday, it will put them in a difficult spot in the NFL standings. Sitting a game behind the Titans, the upcoming schedule would make it even more difficult to cover that ground in the AFC East and reclaim the division and a home playoff game.