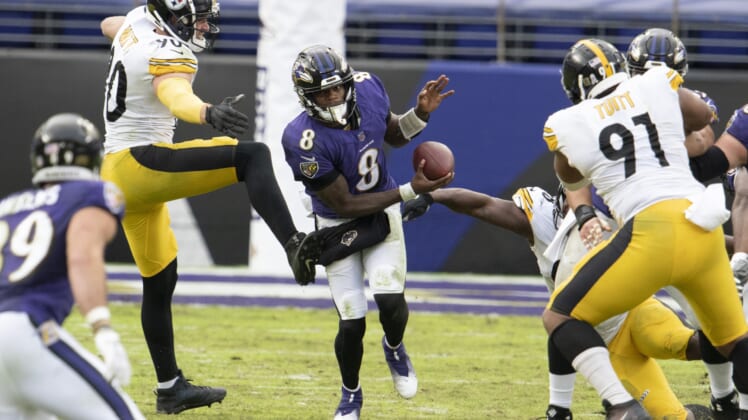 NFL news: The Week 12 game between the Pittsburgh Steelers and Baltimore Ravens is rescheduled for a second time, following Baltimore’s worsening COVID-19 outbreak.

Just days after the NFL postponed the Thanksgiving Day rivalry game, it will now push the contest back another two days after the latest wave of new coronavirus cases from the Ravens.

According to ESPN’s Adam Schefter and Dianna Russini, the Ravens and Steelers will now play on Tuesday night.

The league’s decision will also impact the NFL Week 13 schedule. As a result of the second postponement, next week’s Thursday Night Football game between the Ravens and Dallas Cowboys will be moved to Monday night.

Problems started on Thursday for the Ravens. A strength and conditioning coach, who reportedly wasn’t following the NFL’s COVID-19 protocols, tested positive for the coronavirus. In addition to not reporting symptoms, the unidentified coach didn’t regularly wear his mask and didn’t always have his electronic tracer on him.

On Sunday night, Baltimore began to understand the magnitude of its COVID-19 outbreak. Both running backs J.K. Dobbins and Mark Ingram tested positive for the virus, following the tests conducted before the game. The Ravens closed their team facility on Monday morning then were given clearance from the NFL to open it for a walkthrough practice, per ESPN.

On Wednesday, the league finally rescheduled the Steelers and Ravens game. It came on the same day Baltimore announced discipline for the staff member who caused the COVID-19 outbreak by disregarding protocols.

Lamar Jackson tested positive for the coronavirus Thursday and the team believes he contracted the virus during Sunday’s game. In that contest, he worked with center Patrick mehari and shared a backfield with Dobbins and Ingram.

The Ravens have closed their team facility for the foreseeable future, with Monday as the best-case scenario for when players and coaches could return.

If additional players test positive for COVID-19 in the next 72 hours, the league will be down to only two options. Either it is forced to adopt a Week 18, which will delay Super Bowl LV, or the Ravens are forced to forfeit Week 12. If that happens, it would be the first forfeited game in NFL history.