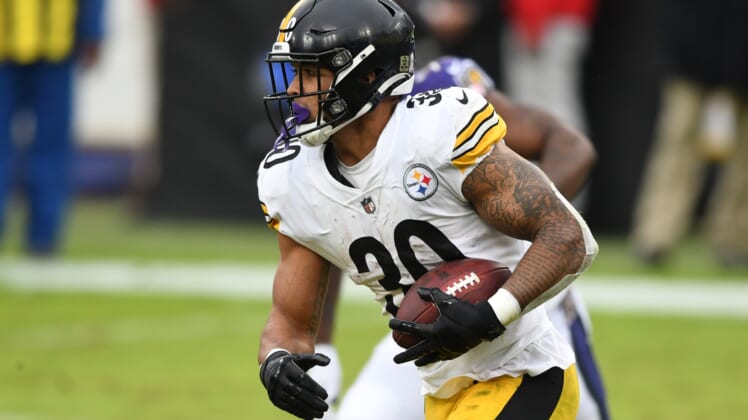 Steelers news: Pittsburgh Steelers running back James Conner has reportedly tested positive for COVID-19, just the latest outbreak that is putting the Steelers and Baltimore Ravens game in jeopardy.

Originally scheduled to be played on Thanksgiving Day, the NFL first moved the rivalry game after the Ravens’ COVID-19 outbreak. When the team kept reporting new cases, the league rescheduled Sunday’s game for Tuesday night.

Just as Baltimore’s outbreak seems to be improving, though, things have taken a turn in Pittsburgh with another potential outbreak.

Problems first emerged for the Steelers on Friday, when the team placed defensive lineman Isaiah Buggs, Stephon Tuitt and offensive lineman Jerald Hawkins on the Reserve/COVID-19 list. As the team continued to conduct contact tracing, the scope of the outbreak widened.

According to NFL Network’s Aditi Kinkhabwala, running back James Conner and an unidentified assistant coach tested positive for COVID-19 on Saturday. The results came from a new round of tests conducted the day before.

Conner’s positive test is especially concerning. A survivor of non-Hodgkin’s lymphoma, the 25-year-old running back is considered a higher risk for complications from the coronavirus.

Heading into Sunday, the Ravens (14) and Steelers (four) have 18 combined players on the Reserve/COVID-19 list and they aren’t eligible to play in Tuesday’s game. That number could climb even higher in the next 48 hours as both teams continue daily testing, with players and staff still in the incubation period from exposure.

Notably, the Steelers have been very vocal in complaints on social media regarding the multiple delays. The team basically lost its bye week due to the Tennessee Titans’ COVID-19 outbreak and planned to take advantage of additional rest days following their Thanksgiving Day game.

Instead, the game was moved to Sunday to the situation in Baltimore. As that outbreak progressively spread, just as the Steelers were preparing to play Sunday, the matchup was postponed for a second time.

Now, the NFL might be forced to take the drastic steps it was hoping to avoid. The league has done everything possible to avoid creating a Week 18 slate for makeup games, but an outbreak from the Steelers would force the league’s hand.

If the Steelers report additional positive tests in the next 48 hours, compromising their roster and risking an even wider spread of the virus, the NFL will likely move the game to Week 18. In that instance, the NFL Playoffs and Super Bowl LV will also be delayed.