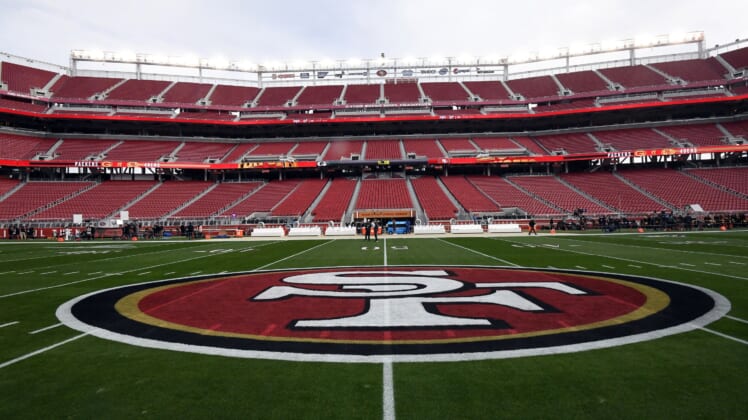 Santa Clara County released new COVID-19 restrictions on Saturday that will leave the 49ers without a home for several weeks.

In a directive announced by the Santa Clara County Public Health Department, obtained via the San Francisco Chronicle, no pro or college sports teams can have games or practice in the county if there is direct contact.

The ordinance will last for at least three weeks, putting two of San Francisco’s games in jeopardy. Before this announcement, the 49ers were scheduled to host the Buffalo Bills (Dec. 7) in Week Week 13 and the Washington Football Team (Dec. 13) in Week 14.

It will go into effect on Monday, allowing the team to travel for Sunday’s game against the Los Angeles Rams and then fly home later that night. The team is currently exploring alternatives, per ESPN’s Nick Wagoner, to determine where they will call home for the next month.

While the team will avoid a mandatory 14-day quarantine when returning on Sunday, they could face problems later. If they return to Santa Clara County after a two-game road stretch in Week 15 and Week 16, when the rules might still be in place, the 49ers would require an exception or be unable to close out their season in Week 17 against the Seattle Seahawks.

The 49ers could consider Oakland Coliseum, the former home of the Oakland Raiders, or Oracle Park, home of the San Francisco Giants, as hosting sites. But there would remain the risk of other counties in the Bay Area adopting similar restrictions.

All of this comes amid a surging spike in cases of COVID-19 across the United States. California is experiencing its second massive wave of the coronavirus, with more than 1 million total cases during the pandemic and the number of hospitalizations rapidly increasing.

The NFL feared there would be a massive spike in cases after Thanksgiving and the Baltimore Ravens’ outbreak, which has forced their game against the Pittsburgh Steelers to be rescheduled twice, is evidence of what could be looming.

If things weren’t already complicated enough for the league to figure out, local ordinances just add another hurdle standing in the way of a completed regular season.

Saturday’s news will have a significant impact on the team’s remaining schedule for the 2020 season. While the 49ers will be able to play on Sunday without any issues, the real problems start in Week 13.