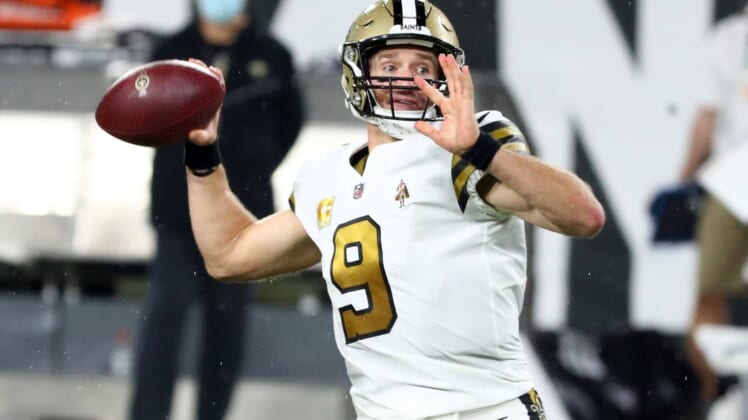 NFL injury report: We’ve passed the halfway point of the NFL season and the injuries continue to pile up after every game. As we approach Week 11, fantasy stars like Drew Brees and Christian McCaffrey could be sidelined.

The news on the injury front isn’t all negative. At a time when teams are exercising more caution with their core players, making sure no one is rushed back and an injury is aggravated, several fantasy starters could return to the field this week.

Of course, these injury situations are fluid. Fantasy owners were delighted when McCaffrey returned in Week 9, only to see him hurt his shoulder. Now, just when he seemed ready to make it back, things have taken another unfortunate turn.

Let’s dive into the NFL injury report and the latest updates for Week 11.

Drew Brees was already on the New Orleans Saints injury report entering Week 10, dealing with an injury to his throwing shoulder. He played through the pain, but a crushing hit from the San Francisco 49ers forced him to miss the second half on Sunday due to a rib injury.

According to ESPN’s Adam Schefter, Brees suffered multiple fractured rib on both sides. Even more concerning, he is dealing with a collapsed right lung. Needless to say, we’re looking at a multi-week absence for the future Hall of Fame quarterback.

The Saints were forced to play without Drew Brees for a stretch last season. In his absence, Teddy Bridgewater was sharp. He completed 69.7% of his attempts with 1,205 passing yards and a 9/2 TD/INT ratio across five starts. While the Saints are reportedly planning to start Taysom Hill, we still think Winston will play a lot.

Winston boasts incredible arm talent with the ability to make any throw, but he also turns the ball over like no other. Set to face the Atlanta Falcons, who have allowed nearly 2,800 passing yards and a 22/7 TD/INT ratio in nine games, Winston would have a great matchup if allowed to start. With uncertainty surrounding how much he plays, fire up Taysom Hill if he is TE-eligible. Otherwise, bench both of these quarterbacks.

Calvin Ridley has dealt with his share of injuries this season. He suffered a foot injury in Week 8. Instead of risking further damage, Atlanta took advantage of its upcoming bye week by resting the star receiver in Week 9 and giving him two full weeks to rest.

Ridley was a limited participant in practice on Wednesday, taking part in individual drills. He continued to improve throughout the week and is listed without a designation on the final NFL injury report, clearing the way for a return. Make sure he is in your fantasy lineups for Week 11.

As if playing without Drew Brees wasn’t enough, the Saints are now in danger of being without their star running back. Kamara missed practice on Thursday with a foot injury, putting his availability for Week 11 in jeopardy.

For the time being, Kamara doesn’t seem overly concerned. He told reporters that he is alright and the issue is the same thing he played through in Week 10. He wasn’t efficient as a runner against the San Francisco 49ers, racking up just 16 rushing yards on 12 carries. However, he scored three total touchdowns and hauled in five catches for 51 receiving yards.

If Kamara cannot play in Week 11, Latavius Murray would immediately rank as a top-12 running back. In limited action as a starter last season, he racked up 428 rushing yards, 138 receiving yards and five total touchdowns.

It’s been a frustrating few weeks for Mixon and fantasy owners. There was hope entering Week 10 that the bye gave his mid-foot sprain enough time to heal. When the NFL injury report came, Cincinnati’s star running back was ruled out after being unable to practice.

He suffered the injury in Week 6 and has now missed three consecutive games, a rarity for a player who has often played through pain. Unfortunately, Saturday’s news makes it clear that this is a far more severe injury than realized. By landing on injured reserve, Mixon will miss the next three games. In a best-case scenario, he could return for Week 14.

Gio Bernard immediately becomes an RB2. He’s coming off a rough performance, but that game got out of hand. This time around, he’d face a defense that just allowed 68 receiving yards and 81 rushing yards to D’Andre Swift. Given Bernard’s all-purpose abilities, we feel confident in him as a starter for the next few weeks.

After a dominant performance in his first game since Week 2, fantasy owners woke up on Nov. 9 to learn McCaffrey would be sidelined once more. A shoulder injury forced the All-Pro running back to miss Week 10, but there was hope late in the week it would be a one-game absence. It seems that hope is gone.

ESPN’s Adam Schefter reported Monday that McCaffrey is unlikely to play on Sunday against the Detroit Lions. Carolina believes the severity of his shoulder injury warrants a multi-week absence and they will be cautious with the NFL’s highest-paid running back. Sure enough, Carolina has already announced McCaffrey won’t play this week.

If you have Mike Davis, fire him up as a top-12 running back for Week 11. The Detroit Lions allow 140-plus rushing yards per game, with a startling 4.7 yards per carry. We also just saw J.D. McKissic snag seven passes against this defense. Start Davis in DFS and season-long leagues.

Update: Allan Lazard activated off IR, will be on snap count

Lazard delivered his breakout game on Sunday Night Football in Week 3, taking advantage of his opportunities with Davante Adams sidelined. The 24-year-old receiver exploded for 146 yards and two scores, emerging as a bonafide No. 2 receiver in Green Bay’s offense. Hours later, he landed on injured reserve with a core muscle injury.

Lazard returned to the practice field before Week 10, with Matt LaFleur indicating he would be a game-time decision under normal circumstances. Green Bay gave him another week to heal and he was activated off IR on Tuesday. While he is expected to suit up in Week 11, Matt LaFleur indicated Lazard will be eased back into action.

If Lazard is cleared to play in Week 11, he is a risk-reward WR4. There’s no denying a matchup against the Indianapolis Colts, who allow just 198.7 passing yards per game and the lowest quarterback rating (78.9), is difficult. It’s more concerning for Davante Adams, but Lazard’s limited snap count hurts his upside.

Indianapolis will likely have Xavier Rhodes, who is having a great year, follow Rhodes on the outside. Meanwhile, Lazard might line up against Rock Ya-Sin. It’s been a rough year for the young cornerback, with 25 receptions allowed on 218 coverage snaps and an atrocious 41.3 coverage grade, per Pro Football Focus.

Just as Justin Herbert started to settle in as the best rookie in the NFL, Los Angeles lost its star running back to a significant hamstring strain. The Chargers placed Ekeler on injured reserve after Week 4 and head coach Anthony Lynn said in late October that Ekeler would be back “later than sooner.”

While there are few updates from the team, Ekeler is keeping fans in the loop on Instagram. He started running last week and is steadily increasing his activity. The Athletic’s Virginia Zakas, an injury expert, indicated that a Week 11 return is unlikely due to the risk of a significant setback. However, we could see Ekeler back on the field in Week 12.

There’s still a good chance that Detroit’s franchise quarterback will be able to go Week 11 against the Carolina Panthers. However, it remains to be seen how healthy Stafford is going to be. At 4-5 on the season and battling for playoff relevance, the Lions are going to do everything possible to make sure he’s on the field.

What this means from a fantasy perspective is that Lions rookie running back D’Andre Swift becomes a clear start in every format. He’s gained 246 total yards over the past two games.

Coming off a breakout performance, football fans in Detroit were excited about D’Andre Swift. The Lions finally made him the featured running back and with a cupcake matchup against the Carolina Panthers, it was a tremendous opportunity for another huge performance.

Unfortunately, that all changed on Thursday. Swift entered the concussion protocol after Thursday’s practice and has now been ruled out for Week 11. More concerning, with Detroit set to play on Thursday Night Football in Week 12, there is a real chance that he misses multiple games.

Adrian Peterson is a low-end RB2 against the Panthers and should maintain that value in Week 12 against the Texans. However, Kerryon Johnson will see an expanded role and that negates some of Peterson’s upside.

Fantasy owners were immediately worried on Thursday when Davante Adams went from a limited participant to a non-participant in practice. He was sidelined by an ankle injury, which he suffered in Week 10. Fortunately, head coach Matt LaFleur said he expects the Pro Bowl receiver will play against the Colts. Even in a tough matchup, Adams is a must-start WR1.

Update: Lockett hauled in nine receptions for 67 yards and one touchdown in Week 11

Lockett came out of Week 10 with a knee sprain, missing consecutive practices this week before Thursday Night Football. It put his availability for the primetime matchup against Arizona in jeopardy, potentially dealing a huge blow for fantasy owners and Seattle’s passing attack.

Fortunately, despite being listed as questionable, head coach Pete Carroll said Lockett will play in Week 11. He clearly isn’t at 100%, which will limit his effectiveness and the chances for explosive plays. We’re not expecting another 200-yard, three-touchdown game, but Lockett is a must-star as a WR1.