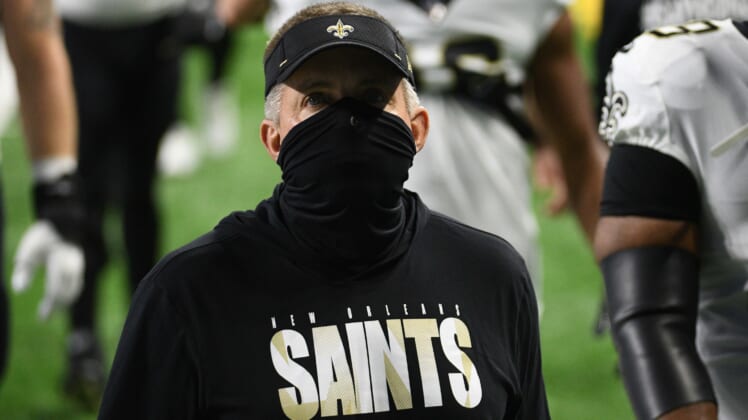 Saints news: The New Orleans Saints are reportedly facing significant discipline from the NFL for violating the league’s COVID-19 protocols following their Week 10 win against the Tampa Bay Buccaneers.

Just over a week after the NFL handed down harsh penalties to the Las Vegas Raiders for repeated violations, which the team is appealing, the Saints could soon be subject to punishment.

Following a statement victory over the Buccaneers in Week 9 on Sunday Night Football, the Saints went to their locker room and celebrated. In a video released to the public, players and coaches were seen without masks, in direct violation of the NFL’s protocols.

According to ESPN’s Adam Schefter, the Saints are now facing significant discipline for their actions. While the organization’s legal team is trying to push back against the issue, punishment could be handed out later this week.

Due to multiple COVID-19 outbreaks, the NFL has continued to enhance its safety protocols. After the Tennessee Titans’ outbreak, which the NFL determined was caused by not abiding by guidelines, the organization was fined. Following the investigation, the NFL made it clear future violations by teams could warrant far harsher penalties.

We saw this most recently with the Las Vegas Raiders. A few weeks ago, head coach Jon Gruden was fined for not wearing a mask during a home game against the New Orleans Saints. Shortly after that, the NFL fined Raiders’ players for COVID-19 violations at a charity event.

In Week 6, offensive tackle Trent Brown tested positive for COVID-19 and the Raiders almost had to play without their entire starting offensive line. It was later discovered that Brown didn’t follow NFL protocols before contracting the virus.

Saints news: Team has a history with COVID-19 issues

The Saints are no stranger to COVID-19 scares and protocol violations. They nearly had a game postponed in October due to a positive test.

In Week 2, coincidentally against the Las Vegas Raiders, Sean Payton was caught on video not wearing his mask properly on the sidelines. It was captured multiple times on the Monday Night Football broadcast and the NFL acted swiftly. The Saints were fined $250,000 and Payton was fined $100,000.

The filmed celebrated from the Week 9 victory showed linebacker Demario Davis, quarterback Jameis Winston and numerous other players celebrating without face coverings. The video spread quickly, with Davis and defensive back C.J. Gardner-Johnson also sharing different angles of the celebration on social media.

Based on precedent, it wouldn’t be a surprise if the Saints received the same punishment as the Raiders. If that happens, the organization will have forfeited $750,000 in fines this season. On top of that, they will lose a valuable draft pick.

Outside of repeated COVID-19 violations, things are going well for the Saints. They have won five consecutive games and are in the driver’s seat to win the NFC South. With a soft schedule upcoming, New Orleans has a great shot to extend its lead and could compete for the No. 1 seed in the NFC.

The Saints are in win-now mode, with Drew Brees likely playing in his final NFL season. Michael Thomas is back and this defense is starting to regain its form as a respectable unit that can generate turnovers and pressure.

More victories are coming for New Orleans, but the team would be wise to follow the safety protocols more closely. Otherwise, the next penalty could have far greater consequences for a team facing great uncertainty after the 2020 season.