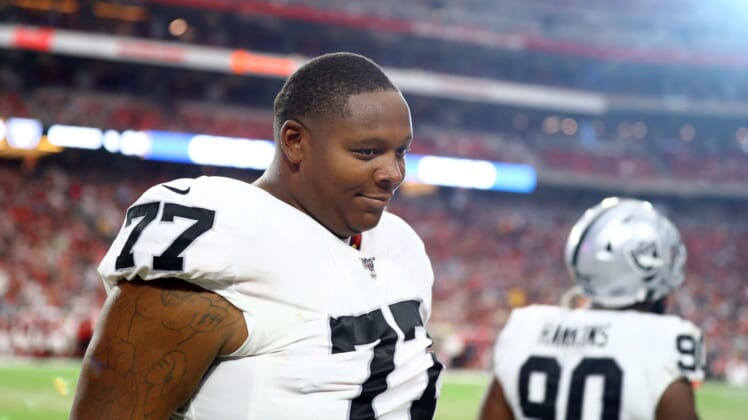 Las Vegas Raiders right tackle Trent Brown has had himself an eventful 2020 NFL season. That included the former Pro Bowler contracting COVID-19 back in October.

However, news coming from the Raiders’ game against the Browns in Cleveland on Sunday is even more scary. Brown was apparently wheeled out of the Raiders’ locker room due to an unknown illness prior to the game.

While there was obvious speculation that it was COVID-related, we now have more information on the incident. It’s not great.

This is as scary as it gets. In fact, a mishap like that could have very well been fatal. For their part, Raiders teammates were extremely concerned about their starting right tackle before ultimately defeating the Browns.

There’s no other information as it relates to Trent Brown’s status outside of the fact that he will remain hospitalized overnight in the Cleveland area.

All of this comes after a mishap by a Los Angeles Chargers resulted in quarterback Tyrod Taylor having a punctured lung earlier in the season. In the end, that cost Taylor a couple weeks and his status as the Chargers’ starter.

These are obviously scary situations.

As for Trent Brown, he was a late scratch for Week 8’s game against Cleveland. We now know why. The hope here is that this won’t have any long-term health implications for Trent Brown.

Brown, 27, signed a whopping four-year, $66 million deal with the Raiders back in March of 2019. He’s now suited up in all of two games for the Raiders thus far this season.

There was drama between the Raiders’ organization and their star right tackle before this mishap. One has to wonder whether that will be taken to a whole new level.

For now, the concern has to be about Brown’s well-being.