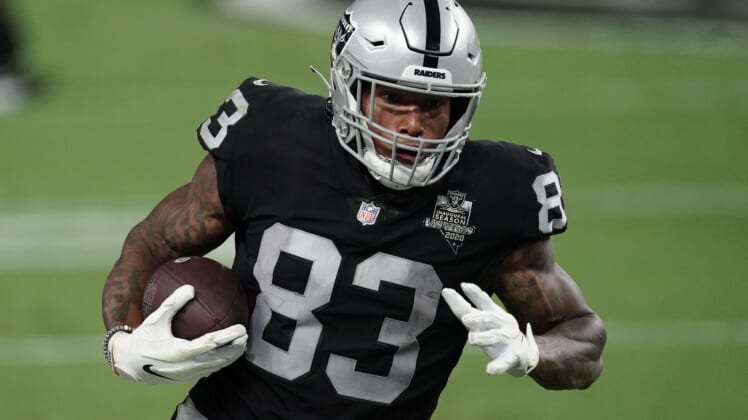 The league launched an investigation last week after multiple Raiders’ players, including quarterback Derek Carr, were photographed without masks at The Darren Waller Foundation charity event in Henderson, Nev. On Monday, the NFL levied fines against all players who were at the fundraiser without masks.

According to NFL Network, Waller is being fined $30,000 for hosting a charity event where masks weren’t required. While he will receive the biggest fine, he isn’t the only Raiders’ player who will be writing a sizable check to the NFL.

Carr was reportedly fined $15,000 for attending the fundraiser without a face covering. Several of his teammates each received word that they will owe the NFL $10,000 for violating the league’s COVID-19 policy.

Before the season began, the NFL released guidelines for all players to follow during the COVID-19 pandemic. The league specifically outlined that personnel could be fined for attending mass gatherings without masks and it followed through with its disciplinary action on Monday.

While the charity event occurred before the Tennessee Titans’ COVID-19 outbreak, the league’s decision not to grant any leniency might have been impacted by it. The NFL already postponed two games this week, with the Kansas City Chiefs and New England Patriots set to play tonight, highlighting the dangers of playing during a health crisis.

On Monday, the NFL held a conference call with coaches and executives from every team to emphasize the importance of accountability and sticking to safety protocols. Meanwhile, the league is also working with the NFL Players Association on an investigation into the Titans’ outbreak.

NFL news: Latest round of COVID-19 test a good sign for Titans-Bills

Moving forward, all options are on the table to preserve the 2020 season. Among the possibilities, creating multiple bubbles to host teams for the rest of the year and adding Week 18 to the schedule to allow for potential makeup games.

This won’t be the last time an NFL team or player is disciplined. In fact, given head coach Jon Gruden was spotted not wearing his mask properly on the sidelines in Week 4, he could face even harsher discipline from the league.