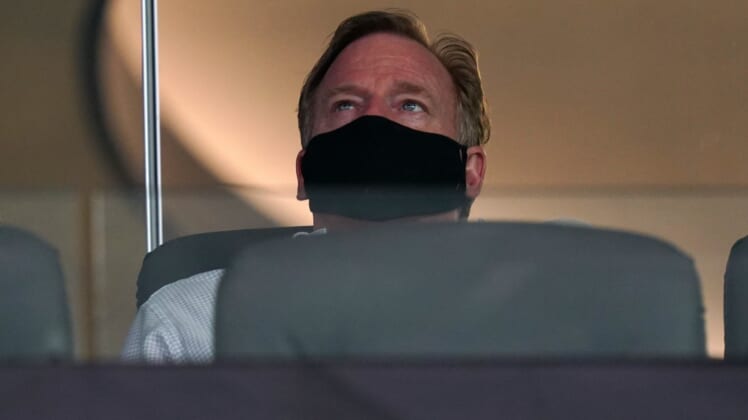 After three weeks without any hiccups during the COVID-19 pandemic, the NFL has already lost one Week 4 game and another is in jeopardy after Cam Newton tested positive for the coronavirus. Now, with the reality of the situation more evident than ever, could the NFL be prepared to move to a bubble?

Coming into the 2020 season, the NFL was confident it could hold a full 17-week regular season. While there was preliminary discussion about the NFL Playoffs being held in a bubble, there were no signs of trouble looming early this season.

With the situation changing in an instant, the NFL could be prepared to make drastic changes.

Will the NFL have a bubble?

The NFL went into the summer watching the NBA and NHL returns very closely. Both leagues brought their players back into a bubble, isolating them in quarantine and creating an environment free of the coronavirus.

The bubble worked perfectly for the NBA and NHL, but the NFL stuck with its plan without enough time to create quarantined locations where 53-man rosters, practice squads players and coaches could all be housed, practice and play. Now, after experiencing its first COVID-19 outbreak, commissioner Roger Goodell is ready to take drastic action.

According to Pro Football Talk’s Mike Florio, the Titans’ COVID-19 outbreak and Newton’s positive test have left the NFL ready to move every team into a hotel for the remainder of the season. The idea first popped up in July, when the NFL tried pitching the team-by-team bubble to the NFL Players Association.

However, the NFLPA wouldn’t go for the idea. The players’ union balked at putting everyone, including coaches and essential personnel, in a hotel for the entire 2020 season. The negotiations, which took place before training camp, resulted in daily COVID-19 testing, player opt-outs and other safety protocols.

It’s possible the players’ feelings toward a bubble could change, given the events from this week. While Tennessee’s game against the Pittsburgh Steelers was rescheduled for Week 7, the Titans are now in jeopardy of being sidelined for Week 5 with five more positive tests in recent days. When games are suspended, that meant lost checks for every player on the roster.

Meanwhile, Sunday afternoon’s New England Patriots-Kansas City Chiefs contest will be played on Tuesday in the best-case scenario. If there are additional positive tests, which is probable given the number of players who practiced with Newton, that game might also need to be moved to a later date. Instantly, not even at the quarter-point of the 2020 season, the NFL is running into problems with a full 16-game schedule.

It’s unknown if the NFLPA would be willing to change course and support a move into team-by-team bubbles. If the idea received approval, the NFL would likely make arrangements immediately. Of course, the league could also consider pushing back the playoffs and adding Week 18 and Week 19 to the regular-season schedule to play makeup games.

There are billions of dollars at stake for NFL owners, coaches and players this year. Some will be opposed to being stuck in a hotel for three months, potentially kept away from family members and the outside world for the rest of 2020. But it might be necessary for a full season to be played. Ultimately, it will come down to whether or not the personal sacrifice is worth the guaranteed game checks for players.