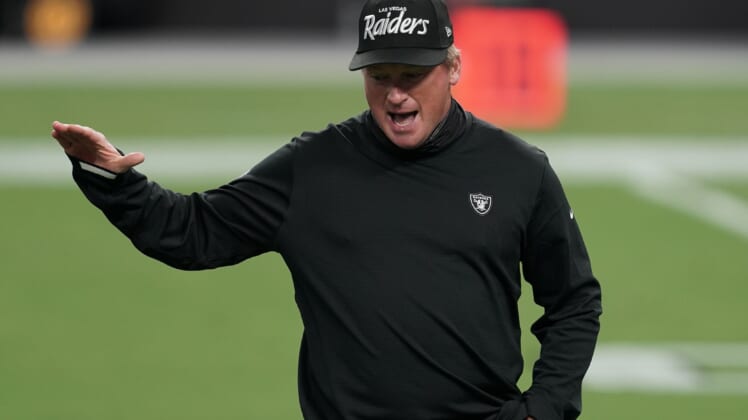 The NFL outlined strict COVID-19 protocols before the 2020 season and once again the Las Vegas Raiders are being fined for violating the league’s safety guidelines.

A week after the NFL fined the Raiders $250,000 and head coach Jon Gruden $100,000 after Gruden didn’t follow face-covering protocols in Week 2, Las Vegas is taking another hit to its pocket.

The Raiders had every reason to celebrate after delivering a stunning victory on Monday Night Football in their Las Vegas debut. Unfortunately, due to a violating during the team’s celebration in the locker room, the NFL came down hard on the organization once again.

According to NFL Network’s Ian Rapoport, the Raiders were fined $50,000 for allowing a non-credentialed employee into the locker room after their win on MNF.

The NFL gave teams some cushion in Week 1 after coaches didn’t wear masks during the entirety of games on the sideline. After issuing warnings the first time, the league dropped the hammer with massive fines for Gruden, the New Orleans Saints and head coach Sean Payton. The discipline came after San Francisco 49ers coach Kyle Shanahan and Seattle Seahawks coach Pete Carroll for not following the face-covering protocol.

Entering Week 4, the Raiders have already been fined $400,00 in total through their first three games. Things might get even worse for the organization, with the NFL launching an investigation after Raiders’ players attended a charity event hosted by teammate Darren Waller without masks.

While NFL commissioner Roger Goodell was willing to be lenient early, the Tennessee Titans’ COVID-19 outbreak has escalated concern around the league. With two games already postponed and the league’s sense of security busted, light punishments or warnings won’t work.

Related: Will the NFL use a bubble this season?

The COVID-19 protocols have now been enhanced following the troubling developments around the league. In addition to stricter guidelines, the NFL is prepared to suspend people or take draft picks away from any team that violates the league’s rules.