Sean Payton, Jon Gruden latest to be fined by NFL for not wearing masks 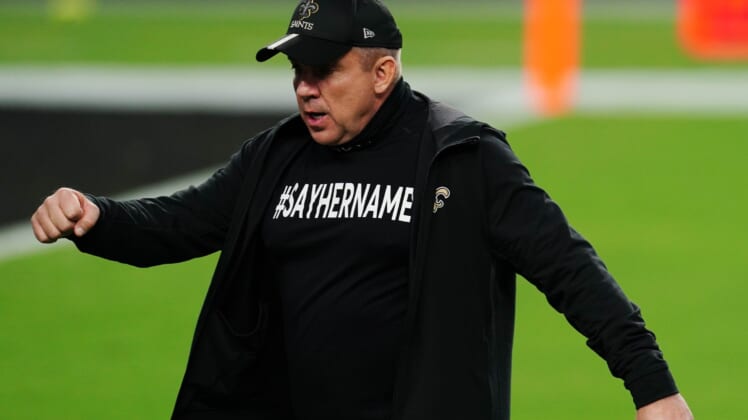 The NFL is dead serious about its COVID-19 policy. Said policy has now also cost head coaches and teams a whopping $1.75 million in cold-hard cash.

One day after Pete Carroll (Seahawks), Kyle Shanahan (49ers) and Vic Fangio (Broncos) were fined $100,000 for failing to wear masks, the NFL has come down with more stiff punishments.

As with the three coaches mentioned above, both Payton and Gruden were fined $100,000. Their respective teams were also fined $250,000 — the same as the Seahawks, 49ers and Broncos.

This really shouldn’t be an issue. The NFL set forth COVID-19 protocols long before Week 1 of the 2020 season started back on Sept. 10. Teams, players and coaches should be following these protocols at every turn.

These fines come on the same day that the NFL released its latest COVID-19 test results. Zero positive tests among players over the past week. Since testing started around the league back on Aug. 12, only seven positives have come through out of 94,091 tests conducted.

If it’s working, it’s working. It seems to be illogical to throw out these protocols, especially on national television. The NFL worked with health experts to come up with guidelines that both sides figured would help the 2020 season continue without the same issues we’ve seen around the Major League Baseball world.

Two of the NFL’s best-known coaches openly ignoring said protocols is certainly not a great look. We’re highly intrigued to see if the fines continue to go up should other coaches opt against following the league-mandated protocols. We’re also intrigued to see how owners are going to respond. That’s $1.25 million in fines between five teams through two weeks.