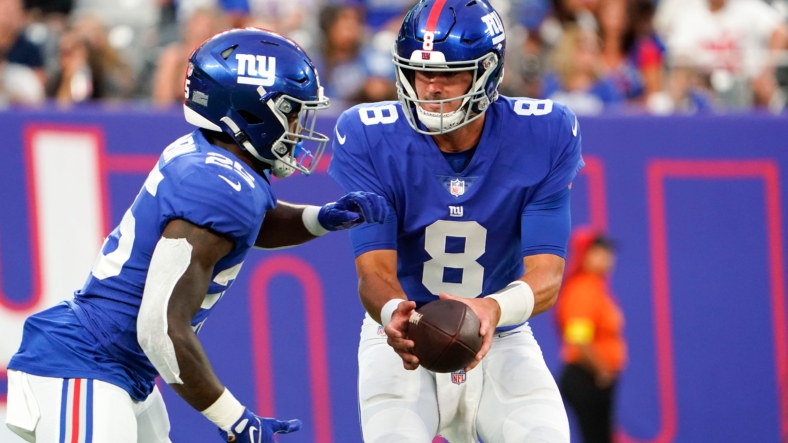 We’re just over a week away until the New York Giants kick off their 2022 season in Nashville to take on the Tennessee Titans.

There’s a ton of speculation on how Big Blue will fare in the first season under first-time head coach Brian Daboll. Any time an organization makes a head coaching change, the hope is that he can revitalize the team.

A change to the coaching staff along with new general manager Joe Schoen who drafted Kayvon Thibodeaux and Evan Neal in the first round, has brought optimism to the franchise. Soon we’ll see if the new additions translate into more wins than in the previous five years.

Several factors determine the outcome of a season, and it’s difficult to assess a team until you see them play in the regular season. But we’ll dive into all three possible scenarios for the Giants in 2022.

Our best-case scenario involves good health, an improved offensive line, and pass rush, while Daniel Jones shows he can be a solid NFL quarterback. Under this way of thinking, the G-Men can contend for an NFC Wild Card berth.

If this scenario were to happen, Giants ownership would be ecstatic. They want nothing more than to make the team become contenders again and for Jones to show that he can be a franchise quarterback.

The reason why there’s hope for this is because of how Daboll helped developed Josh Allen into an All-Pro caliber quarterback when he was the offensive coordinator with the Bills. Nobody is expecting him to turn Jones into an Allen, but if he can groom Jones into becoming an above-average quarterback, then expect New York to pull off a few upsets this season.

Coaches say all the time that games are won and lost in the trenches. For the first time in over a decade, both the Giants’ offensive line and defensive front seven appear to be formidable.

The addition of Neal to go along with left tackle Andrew Thomas gives Big Blue solid bookends to protect Jones. Free agent acquisitions Jon Feliciano and Mark Glowinski will provide a physical presence up the middle that will help keep Jones upright and open holes for Saquon Barkley.

In their long, storied history, the New York Giants have always been at their best when they had a dominant pass rush. Now they have three men on the defensive front seven that opposing quarterbacks have to be mindful of, and that’s Thibodeaux, Azeez Ojulari, and Leonard Williams. They may not resemble the NASCAR packages during the Tom Coughlin era, but we’ll see an increase from the 34 sacks that the team had a season ago.

Injuries are part of the game, as we all know. However, it seems over the last several seasons, New York has had a rash of injuries to several key players. As hard as it is to win games, it’s even harder when you’re without some of your best players.

Daboll stated earlier this summer that he’s constantly speaking with the medical staff and taking their advice. If New York can become one of the healthier teams in the league as opposed to one of the most injury-prone, then expect this team to win nine or 10 games and contend for a Wild Card berth.

The worst-case scenario sees Daniel Jones no longer dropping Danny Dimes, with the fourth-year QB failing to improve all while the team is struck by injuries once again as the new additions don’t live up to the hype.

This scenario is the one that fans have been living with for the better part of a decade. The team hasn’t won a playoff game since Super Bowl XLVI, and their record over the last five seasons is 22-59.

Aside from injuries, what has plagued New York over the last several seasons is the play of their 25-year-old quarterback, who has 50 total touchdowns and 49 turnovers. Even if New York’s defense was as good as the 1986 defense, it’s impossible to have any success in today’s NFL when your quarterback is that erratic.

The hope is Daboll can fix Jones. But Jones may not be fixable, and Daboll may not be head coaching material. If we see the same Jones as we did in his previous three seasons, then New York has a very low ceiling.

Everyone hopes Thibodeaux will be the next great pass rusher in the franchise’s history. But just because you hope for something doesn’t mean it will happen. There is some trepidation on the outlook of Thibodeaux as he didn’t flash in the preseason, and his status for the start of the season is in question due to an MCL sprain.

Neal has the potential to be a Pro Bowl offensive tackle, or he could wind up being a bust who doesn’t get a second contract with Big Blue.

There’s a ton of pressure on the shoulders of New York’s top two picks, and if they underperform or the bright lights of playing in the biggest media market in the world, then the franchise would be set back even further.

We touched on the team’s injury history previously, and unfortunately rearing its ugly head again. Starting left guard Shane Lemieux will start the season on IR, and promising receiver Collin Johnson was already lost for the season due to a torn Achilles. Then you have to add the fact that New York might be without their best two edge rushers this season.

The Giants roster is not talented or deep enough to overcome substantial injuries. If this pattern keeps up and players underperform, expect to see another 4-13 season.

Related: 4 reasons for New York Giants fans to be worried ahead of 2022 season opener

Daboll and Schoen may never admit this publicly, but the 2022 season is a rebuilding season for Big Blue. The release of linebacker Blake Martinez on Thursday is a clear indication of this. Although Martinez is a good player, he doesn’t fit defensive coordinator Don “Wink” Martindale’s scheme.

This season is all about developing players, developing a culture, and figuring out which players can help the team for years to come. Some fans may find this a hard pill to swallow, considering they suffered through five consecutive double-digit loss seasons, but it’s the truth.

The realistic expectation for the Giants is for them to win six or seven games and hope that they’re a better team at the end of the season than they were at the start of the season. It may not be what fans want to hear, but at least they should be able to take solace that the team is heading in the right direction and that brighter days are ahead.