5 New York Giants poised to have a breakout season 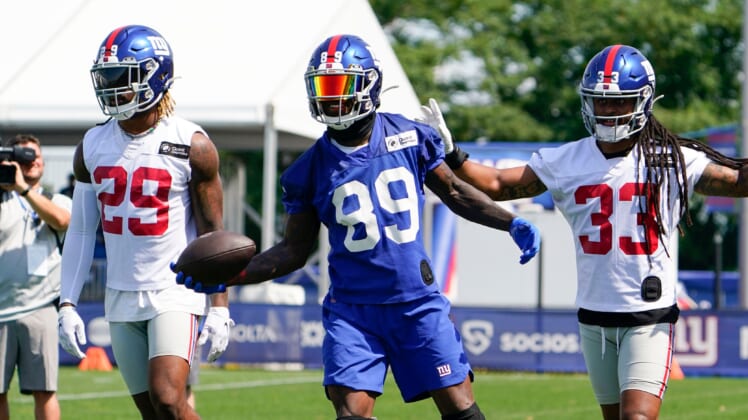 We’re just a few days away from the New York Giants preseason opener against the New England Patriots on August 11th.

The 2022 season is all about taking the first steps into bringing the Giants franchise back to credibility after going 22-59 over the last five seasons.

There’s optimism in the air as new general manager Joe Schoen and new head coach Brian Daboll have brought a new attitude and philosophy to the organization.

This year will see a modern style of offense from Big Blue and an aggressive defense. Thanks to the changes that were made expect a few players to have the best season of their careers and for a few rookies to make an immediate impact.

Here are five players that are poised to have breakout seasons.

Injuries and Covid played huge factors in why Kadarius Toney had a disappointing rookie season. But we got a glimpse of how talented Toney is in the Giants Week 5 matchup with the Cowboys last season when he had 10 catches for 189 yards.

Throughout training camp, Toney has been making spectacular catches and has built a solid rapport with quarterback Daniel Jones. He will surely be the go-to guy in New York’s passing offense as Daboll and offensive coordinator Mike Kafka will get the ball in his hands often. If he stays healthy, Toney will become the first Giant since Odell Beckham Jr in 2018 to have over 1,000 receiving yards.

Related: New York Giants will bring back their classic blue uniforms for 2 games this season

Despite Big Blue’s 4-13 record a season ago, McKinney had a solid season as he recorded 59 tackles and five interceptions. Many felt McKinney, who will turn 24 on Monday, deserved Pro Bowl consideration.

Now with the arrival of new defensive coordinator Don “Wink” Martindale, McKinney will be the quarterback of the defense and be put in position to make plays all over the field. The third-year safety may get the Pro Bowl selection this season, which evaded him in 2021.

Although he has yet to play in a preseason game, so far the fifth overall pick is living up to the hype in training camp. Kayvon Thibodeaux has shown quickness coming off the edge and has been a disruptive force.

Big Blue and their fans have been waiting a long time to have an elite pass rusher, and they believe Thibodeaux is the player they’ve been waiting for. Martindale will have Thibodeaux line up in different positions to create favorable matchups. Not only can the 21-year-old rookie register double-digit sacks this season, but he should be in the running to be Defensive Rookie of the Year.

Another rookie that has had a stellar summer this far is second-round pick (43rd overall) Wan’Dale Robinson. Not only have the Giants lined up the rookie receiver in the slot, he’s also lined up in the backfield.

Robinson is a sure-handed, quick, and shifty receiver that will play a huge role in the Giants offense and might be utilized in the return game as well. He’s tough to tackle in the open field, so he might lead the team in yards after catch. Fans got a chance to witness his running ability in the open field during Friday night’s Blue & White scrimmage when he turned a short completion from Daniel Jones into a long gain.

The versatile receiver could have over 1,000 all-purpose yards in his first season in the NFL.

It might seem weird to have an offensive tackle on this list, but after an up and down rookie season in 2020, Thomas was vastly better last season. The 315-pound tackle even showed that he can be a goal line scoring option as he hauled in a 2-yard touchdown reception in the Giants Week 11 loss to the Buccaneers.

Now that he’s surrounded by better offensive linemen around him, the Giants are hopeful he can develop into one of the best offensive tackles in the league. He might just be on his way.

Related: Two New York Giants veterans that are on the roster bubble ahead of training camp