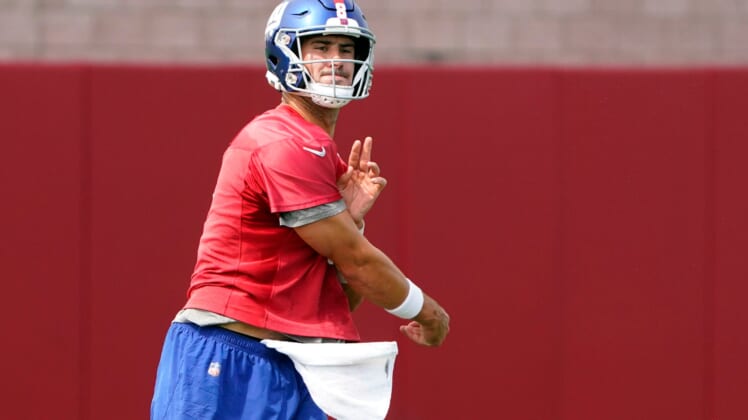 New York Giants quarterback Daniel Jones and the offense got off to a slow start during training camp, adding fuel to speculation that Tyrod Taylor will take over as the starter this season. Fortunately for New York, its contract-year quarterback seems to be improving.

It shouldn’t have come as much of a surprise that Jones and his teammates started out slowly. Still learning the basics of Brian Daboll’s offense, players needed time to gain some familiarity and to get back up to football speed.

However, insiders and reporters took increasing notice as Jones’ woes in practice continued. With Taylor offering experience both as a starter and with Daboll, more inconsistency from Jones might have opened the door to calls for a quarterback competition. Now, that might he changing.

According to Dan Duggan of The Athletic, Jones has delivered his two best practices to date this week. He’s also showed great chemistry with Kenny Golladay, flashing a connection that was missing in 2021.

“Jones completed his final six passes of practice to lead the offense to a touchdown. The drive included an impressive contested catch by wide receiver Kenny Golladay over cornerback Adoree’ Jackson. Jones capped the drive with a swing pass to running back Saquon Barkley, who motioned toward the sideline before the snap. Barkley turned upfield after making the catch and followed a block from wide receiver Wan’Dale Robinson for a short touchdown.”

Duggan notes that while Golladay beet top cornerback Adoree’ Jackson on the highlight play, Jones is picking his spots. When he isn’t tossing up 50-50 balls and allowing his No. 1 receiver to make plays with his size, the Giants’ quarterback is constantly throwing targets at any receiver covered by No. 2 cornerback Aaron Robinson and he’s finding success.

Obviously, it’s too soon to make sweeping conclusions about how Jones will perform this season. With that said, he is making the necessary Improvements in training camp and establishing better rapport with his top targets. If that continues and Dabool lives up to his reputation, Jones could have the best season in his career.