When the San Francisco 49ers announced that they were moving forward with Trey Lance as their starting quarterback, there have been numerous trade rumors surrounding their now backup quarterback Jimmy Garoppolo.

But the rumors that the New York Giants would entertain a trade for “Jimmy G” makes absolutely no sense. And there are a plethora of reasons why New York would not have any interest in the 30-year-old quarterback. Here are five reasons why Garoppolo to the Giants doesn’t work.

Garoppolo has only had success with stacked teams

You can’t deny that Garoppolo has achieved success in the NFL as his win-loss record is 33-14 and helped guide the 49ers to Super Bowl LIV where they would lose to the Chiefs, and to the NFC Championship game last year where they lost to the Rams.

However, the strength of those teams was a great defense, and a power running game led by a physical offensive line. When the 49ers defeated the Packers 37-20 in the NFC Championship game, Garoppolo completed six out of eight passes as the 49ers rushed for 285 yards. So the highest success he achieved was thanks to being on a ready-made team. The Giants aren’t a ready-made team whatsoever. 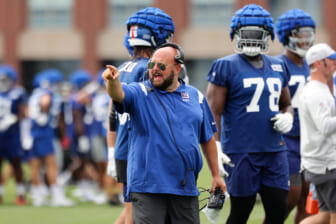 This season is a prove-it year for Daniel Jones

Aside from winning games the most important objective for New York is to see if Daniel Jones can be their quarterback of the future. Obviously, the Giants brass is on the fence with Jones which is why they didn’t exercise his fifth-year option.

But provided that he stays healthy, they will give him every chance to succeed in hopes that Brian Daboll can bring out the best in him. If Jones struggles again this season, New York will look to draft one of the top quarterbacks in next year’s draft. That would be a much better option as opposed to having to work on a contract for the soon-to-be 31-year-old Garoppolo who will be a free agent at the end of this season.

New York Giants have a capable backup in Tyrod Taylor

Perhaps what makes the rumors of the Giants being interested in Garoppolo head-scratching, is that fact they already have a solid quarterback as their backup in Tyrod Taylor. Taylor has grasped the offense quickly and has looked impressive in training camp.

Plus Taylor is a dual-threat quarterback that can beat defenses with his arm and legs which is vital in Daboll and offensive coordinator Mike Kafka’s offense. It wouldn’t make any sense to be interested in trading for a quarterback that doesn’t know the offense and isn’t mobile. 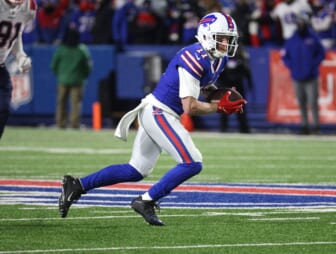 One of the issues that have plagued Daniel Jones is his inability to be healthy. Well, the same can be said for Garappolo as he has missed time due to various injuries throughout his career. He’s only played a full season once, which was back in 2019, and players don’t tend to stay healthier as they get older.

Giants have a limited amount of cap space

Due to the poor financial decisions that the Dave Gettleman regime made, new general manager Joe Schoen had to make some shrewd moves with limited cap space in order to improve the roster. According to spotrac, New York has a little over $6 million in cap space. Garoppolo’s base salary for this season is $24 million. So financially it wouldn’t work.

As you see, a trade that would send Garoppolo to New York wouldn’t make any sense. Even if the 49ers would cut Garoppolo, it’s unlikely that would spark any interest from the Giants. So it’s time to put the rumors of Garoppolo to the Giants to bed and hope that Daniel Jones can have a successful season.