The New York Giants can use all the assistance they can get to turn the offense and quarterback Daniel Jones into a viable force in 2022, and one NFL insider believes Cole Beasley could be a training camp acquisition that helps to achieve that goal.

Beasley is one of the few notable players still available on the free agent market. After being released by the Buffalo Bills in March, after three productive seasons, he surprisingly has not yet committed to a team for the 2022 season.

During a Tuesday appearance on the NFL Network, league insider Mike Garafolo made the case for why Beasley would be a worthwhile addition to any team in the NFL.

“This is a guy with 164 catches over the last two years. Tied for tenth most in the NFL,” Garafolo said. “Yea, he’s 33 but the targets have gone up the last three years. He had a career-high 112 targets last year. This is a guy who still thinks he has good football left and the Bills agreed. There was a possibility he was gonna return to Buffalo, but there were a lot of moving parts with Cole Beasley. That’s why he became a free agent.”

The Giants currently have a solid receiver corps. with veteran Kenny Golladay, 2021 first-round pick Kadarius Toney, 2022 second-round pick Wan’Dale Robinson, and the team’s longest-tenured receiver Sterling Shepard. There is a lot of hope that new head coach Brian Daboll could do for the Giants’ offense as he did when he served as the offensive coordinator for the Bills.

However, that is far from a guarantee with Daniel Jones as his QB instead of Josh Allen, and Shepard’s new Achilles injury throws a new wrench into the receiving situation. With Beasley having a connection to Daboll, and new general manager Jim Schoen — another addition from Buffalo — Garafolo believes the Giants should be taken seriously as a possible destination for the former Dallas Cowboys player in the next few weeks. 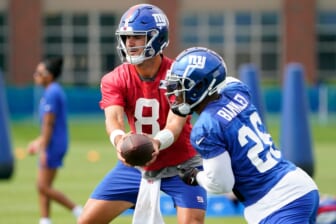 In New York, Beasley would surely have a bunch of opportunities as one of the few players who would completely know the ins and outs of Daboll’s offense. However, landing a significant payday may be the issue. As the Giants have been cash strapped throughout the offseason and that is why they traded their best cornerback, James Bradberry, in the spring.