Rumblings from the New York Giants facility Wednesday claimed the organization needed to shed more cash before the start of the 2022 season, and it looks like that extra cap space will come with the release of fan-favorite linebacker Blake Martinez.

On Thursday, as teams continue to cut players and massage their salary cap situations, the Giants had their first real notable slash this week when ESPN NFL insider Field Yates revealed on Twitter that the organization had cut ties with the 28-year-old veteran. Martinez was battling back to form this summer following missing 14 games last season after tearing his ACL in September of 2021.

Releasing Martinez will save the Giants a little over $3.6 million this season. The move became a necessity for the team once they finalized their 53-man roster and 16-player practice squad on Wednesday, and ended up being $4 million over the regular season salary cap (via Spotrac).

While not quite a Pro Bowl-level player, Martinez has been a solid and reliable talent in the linebacker corps. Be it during his first four years in the league with the Green Bay Packers, after being taken in the fourth round of the 2016 NFL draft, or in his 19 games with Big Blue. In four of his six years in the NFL, he has logged over 140 tackles and an impressive 151 in his first season with the Giants in 2020.

Expectations were that he was likely to be the teams starting right inside linebacker in 2022. Now that job will probably go to rookie Micah McFadden. The move is even more surprising because the linebacker group is already down a key member after 2022 fifth overall pick Kayvon Thibodeaux will be sidelined for a month after spraining his MCL in the team’s second preseason game. 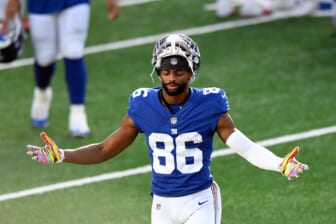 Thibodeaux is expected to get a boatload of minutes upon his return, and with Martinez being released, defensive guru Wink Martindale may very well have two rookies in his starting four at linebacker. That could be very messy during the first half of the season.