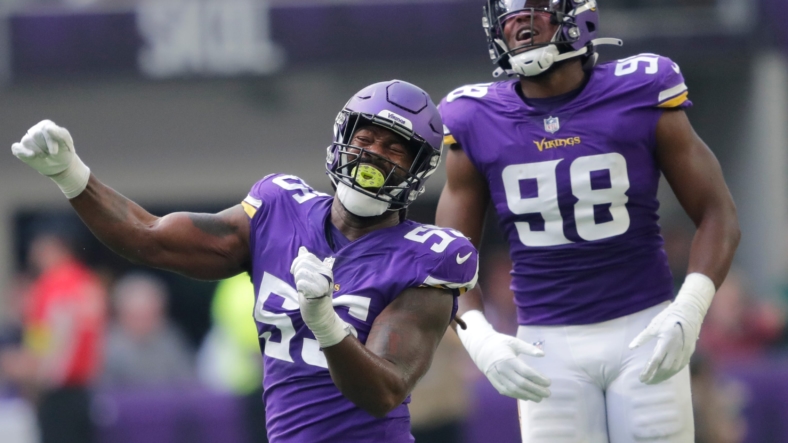 The Minnesota Vikings play the Philadelphia Eagles this week, so, naturally, we’ll take this time to talk about the Buffalo Bills and Baltimore Ravens. The Eagles go and hang 38 on the Lions, and suddenly they are part of the offensive royalty of the NFL, so it’s only fair to put Jalen Hurts in the same category as Josh Allen and Lamar Jackson and see how Hurts stacks up against the grown-up mobile quarterback.

Because of this, we want to compare Hurts, Allen, and Jackson based on passing ability only. First, we had to decide what a useful sample set of games is. One game can be a fluke, but for young players, an entire season doesn’t allow you to see development over time. We settled on five games – if a player can sustain performance for five games, that’s enough to call it a trend.

We looked at a five-game moving average for passer rating for each of these players over the start of their careers. At any point on the chart below, the measurement is the player’s average passer rating over their last five games. That means any movement up or down is only achieved by sustaining the performance for five games. (Note: Jackson and Hurts trends start later because they were not immediate starters, and the “end of year two” isn’t exactly 32 games because they all missed some starts).

Jalen Hurts vs Lamar Jackson – It’s safe to say that, to this point in his career, Hurts has not demonstrated anything like Jackson. That peak prior to the end of Jackson’s 2nd season represents an eight-game stretch where he averaged a 123.5 passer rating. Hurts has never approached Jackson’s highs.

Jalen Hurts vs Josh Allen – This is much more interesting because their tracks for games 7-19 mirror each other so closely. And the narratives are the same: Stefon Diggs went to Buffalo and made Allen great; now A.J. Brown has gone to Philadelphia to make Hurts exactly as great (Brown had 10 catches for 150 yards in Week 1)

However, near the end of their second season, Allen appears to start to track higher; remember, this trend is a five-week average, so it takes several games to build up a difference. We need to ask: is that difference between Hurts and Allen from games 19-28 significant? Let’s look at their best stretches in that time.

Allen’s best run was a seven-game stretch from Week 7-13 of his second year where he had:

Hurts was only dragged down by one terrible game in that stretch, but otherwise it’s close on passer rating. Adding in actual production, not just passer rating over those seven game stretches:

That’s not too close, Allen outperformed Hurts by a wide margin.

Time to look at actual football!

One game does not make a trend, but what we want to see is:

Turns out the second and third questions are related. The Eagles build a huge lead off the back of Detroit’s mistakes. When the Lions weren’t screwing up, they were having success countering an aggressive defense. There wasn’t anything complicated. The Lions just moved one way and ran counter to the flow. The Lions were also successful getting receivers onto linebackers and secondary players just long enough to spring D’Andre Swift for a good gain. Look at all the blockers on defenders on this 4th quarter run:

Mismatches in the secondary and using an athletic line to open running holes is mostly what the Vikings want to do too. The lesson the Vikings need to take from Week 1 is that the Eagles defense can be beaten without forcing plays that could cause mistakes. Kirk Cousins‘ patience is a great asset in this game. Because of this, the key is going to be the Vikings’ defense against the Eagles’ offense.

Here are a few highlight plays to try and answer that more complex question about Hurts.

Answer 1, what kind of passer is Hurts? A jittery one. Hurts can make some great throws with a clean pocket, but he mixes in some really bad-for-no-reason throws. He buys himself extra attempts converting first downs by scrambling. The key to stopping him is disciplined pressure. Hurts did not show anything that suggested he could beat pressure with his arm, he can only beat it with his legs. As soon as there was pressure, Hurts was no longer attempting to throw at all. This went a few ways.

Step 1: Pressure killed the Eagles’ passing game. When the Lions were aggressive with blitzes, Hurts didn’t burn them in the air. This play was a simple corner blitz that Hurts was completely unaware of that resulted in a sack.

Step 2: Contain. Hurts likes to escape to the outside. The Lions were constantly going all out to get Hurts off his spot. This didn’t result in completions, but a lot of 8-12 yard runs like the next image. It’s like the Lions didn’t even know that Hurts could run and just chased him like a …. [hmm  … need a creative analogy here]  … we’ll go with chased him like a Lion chasing an Eagle only, the Lion doesn’t know the Eagle can fly.

Side note: In the play above, that’s Aidan Hutchinson coming through the middle right at Hurts. This could bode well for Za’Darius Smith getting pressure up the middle.

Step 3: Hurts has a sixth sense for knowing when a scramble won’t work. On this play, Hurts is running and is dead to rights. At the last second, Hurts just sort of shot-puts the ball in the general direction of the sideline. Incomplete pass, sack avoided. There isn’t much to do about this, Hurts seemed to be really good at folding instantly and relinquishing the ball in a panic, much like a small child confronted with a monster. When this happens, know it’s a win for the defense because this is what successfully stopping a Hurts run looks like.

Hurts will hit some throws. He’s had some great ones, but they haven’t been consistent. His scrambles generate 1st downs that give him more chances to find that big throw. Chances are, the Vikings would rather bring pressure and force Hurts into quick choices than play a lot of coverage and leave Hurts time.

How to stop Hurts: Get him off his spot as quickly as possible, then keep someone in front of him.

How to beat the Eagles: First, the Vikings must get pressure. Blitzing is fine – even good, because Hurts is so quick to pull the ball down. The key will be guys on the edges keeping contain on Hurts. The Vikings have a few guys that should be good at this: Cam Dantzler is aggressive in run support, this is the bread and butter of Harrison Smith. Fans loved what they saw from Akayleb Evans in run support in the preseason, maybe he can contribute too. Eric Kendricks should be a useful piece watching Hurts as well. If necessary, it may even be worth using a spy on Hurts on some plays.

Wild Card: Lewis Cine is in line to play, but how much? A fast-to-the-ball, hard-hitting, sure tackler lurking near the line of scrimmage is exactly the profile of a player that could spy, cover checkdowns, and stuff scrambles to help shut down Hurts on gameday.