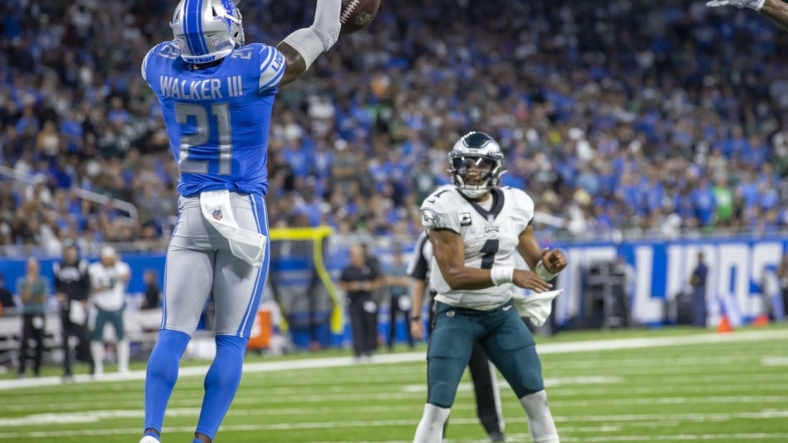 Jalen Hurts passed for 243 yards and rushed for 90 yards and a touchdown as the Philadelphia Eagles held off the host Detroit Lions 38-35 in the teams’ season opener on Sunday.

Miles Sanders gained 96 yards on 13 carries with a touchdown for Philadelphia. A.J. Brown caught 10 passes for 155 yards. The Eagles rushed for 216 yards and scored four touchdowns on the ground.

De’Andre Swift carried 15 times for 144 yards and a touchdown for Detroit. Jared Goff passed for 215 yards and two touchdowns but was also picked off for an Eagles score.

Detroit drove 75 yards after the opening kickoff to take the lead. Swift set up the touchdown with a 50-yard run and Jamaal Williams scored from one yard out on the nine-play drive.

The Eagles tied it early in the second with a 13-play, 82-yard drive. Hurts scored on a keeper on fourth-and-goal from the 1-yard line. He completed four passes to Brown for 62 yards during the drive.

Sanders, who failed to score last season in 12 games, plunged in from one yard out to give Philadelphia a 14-7 lead midway through the second quarter. A 27-yard pass from Hurts to Dallas Goedert set up the touchdown.

The Lions answered with a 75-yard drive, capped by Swift’s 7-yard touchdown run on fourth-and-1.

Hurts connected with Brown on a 54-yard pass to set up Jake Elliott’s 23-yard field goal before the half ended.

Kenneth Gainwell increased the Eagles’ lead to 31-14 with a 2-yard scoring run with 10:21 remaining in the third.

Boston Scott’s 1-yard touchdown run late in the quarter made it 38-21.

Williams’ second touchdown of the game, another 1-yard run, cut the Eagles’ lead to 10 once again.

However, the Eagles then ran out the clock.