Free-agent quarterback Colin Kaepernick has not suited up in an NFL game since New Year’s Day back in 2017.

That could change here soon with reports that the Las Vegas Raiders are working out Kaepernick on Wednesday. These reports come as short while after Raiders owner Mark Davis made it clear he believes the Super Bowl quarterback deserves another opportunity in the NFL.

Deserves is the operative word here. We know the backstory that led to Kaepernick’s departure from the NFL. It seems pointless to re-hash a now six-year old debate that will have both sides screaming into the abyss to make their point.

From an on-field perspective, Colin Kaepernick makes perfect sense for the Raiders. From a community and organizational standpoint, that narrative rings true, too. Here’s why.

Colin Kaepernick is better than Raiders quarterbacks behind Derek Carr

Jarrett Stidham? Nick Mullens? Chase Garbers? These are the three names that exist behind a recently-extended Derek Carr on the Raiders’ depth chart. Three names, who like so many before, them have us wondering what have they done in the NFL to deserve a chance. Yes, that word “deserve” again.

Mullens’ last consistent playing time in the NFL came with Kaepernick’s former 49ers team back in 2020. He threw 12 touchdowns against 16 turnovers in replacing an injured Jimmy Garoppolo. Unlike Kaepernick, this came within the confines of a team that was legitimately months removed from a Super Bowl appearance.

A fourth-round pick of the New England Patriots back in 2019, Vegas acquired Stidham for a swap of late-round picks earlier in May. Seen as a potential heir-apparent to Tom Brady, the Auburn product fell out of favor in New England after throwing two touchdowns against four intereceptions in 48 regular-season pass attempts. That’s fun.

As for Garbers, he was signed as an undrafted free agent earlier this month after a ho-hum four-year career with CAL. These are the three current options to take over if Carr goes down for a playoff-contending Raiders team. That’s playing with fire. 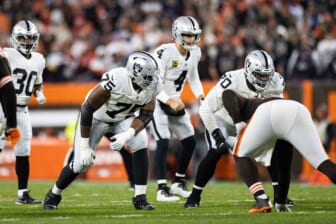 I like that word “deserves” as it relates to this article. If the Raiders do actually sign Kaepernick, nothing will be handed to him. He’d have to beat out the three aforementioned quarterbacks for a spot on the 53-man roster. Kap knows this full well.

That’s no guarantee given how long it’s been since the former second-round pick has suited up. It’s a realistic concern of NFL teams.

With that said, the track record of success is there on Kaepernick’s part. It doesn’t take subjective eye to come to this conclusion. Any one making a point that Kap doesn’t deserve another shot in the NFL from an on-field standpoint is clouded in some sort of echo chamber.

We can point to the 49ers’ 1-10 record in his 11 starts that season. But if we’re going to do that, we also have to admit that one-and-done Chip Kelly was a terrible NFL head coach. We also have to take off our blinders and realize Jeremy Kerley, Quinton Patton, Shaun Draughn and Garrett Celek were the 49ers’ top-four leading receivers that season. Who? Yeah.

I dislike using that word divisive in that it suggests standing up for equality in modern American society and doing good within the confines of charitable work somehow makes Kaepernick divisive. 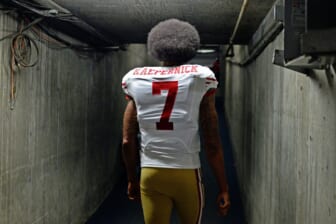 But let’s assume for a second that some markets would accept him more than others (a realistic notion), Las Vegas actually makes the most sense. It’s a progressive desert metropolis within the larger construct of Nevada’s otherwise centrist mentality. Transients come from all over the United States, primarily California itself. A vast majority of those who root for the silver and black and exist in the growing city would be supportive of this happening.