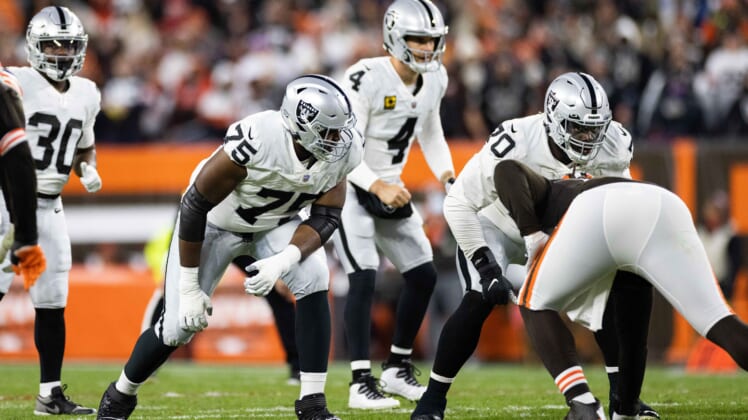 The Las Vegas Raiders will start organized team activities (OTAs) Monday in Henderson, Nevada, which means everyone who’s healthy enough to step onto the practice field will get to work on the road to building a contender for the ultimate prize, a Super Bowl title.

Over the next three weeks, the Silver and Black will have 11 workout days, which include OTAs and mandatory minicamp before about a seven-week break. They’ll return for training camp at the end of July.

For now, let’s focus on the most notable storylines heading into OTAs.

The Raiders have big question marks along the offensive line, particularly on the right side, but they made a recent trade that created another intriguing subplot within the wide receiver unit.

Defensive coordinator Patrick Graham brings a fresh flavor on the other side of the ball with mostly new faces along the defensive line. Could we see a rookie emerge in that group? What about the secondary? Is it completely set or in need of a veteran addition? We’ll also project what’s next for Clelin Ferrell.

Where does Alex Leatherwood take a majority of his reps?

The Raiders’ plan for Alex Leatherwood will shape the right side of the offensive line.

If Leatherwood gets an initial shot to start at right tackle and claims the position, Brandon Parker will become a swing tackle while Denzelle Good, Jermaine Eluemunor, John Simpson and Dylan Parham battle for the two guard spots.

If Leatherwood continues to take most of his snaps at right guard, Parker, Eluemunor and Good will probably battle for the starting spot at right tackle.

Because of the larger size of right tackles on recent New England Patriots’ offensive lines (Trent Brown at 6’8″, 380 lbs, Mike Onwenu at 6’3″, 350 lbs and Eluemunor at 6’4″, 345 lbs), Leatherwood, who’s listed at 6’5″, 312 pounds, seems like a fit at right guard under head coach and offensive play-caller Josh McDaniels and offensive line coach Carmen Bricillo.

Barring a notable addition at right tackle, Parker and Eluemunor seem like the top options to line up on the outside with Good coming along slowly from a torn ACL.

Where does Dylan Parham take a majority of his reps?

Like Leatherwood, Parham can significantly change the complexion of the offensive line. At Memphis, he took most of his snaps at guard and played one season as the starting right tackle, but the Raiders will give him reps at the interior positions.

If Parham makes a quick transition to center, he will push Andre James into a reserve role, but the rookie third-rounder could also start at either guard position. He has two years of experience on the left side and one on the right.

With the idea that Leatherwood makes a better fit at right guard, Parham would have to beat out Simpson at left guard or James at center to start in 2022, which isn’t a tough task under a new regime that will look at this group on a clean slate.

That being said, Parham seems likely to start his career in a reserve role with Simpson (left guard) and Leatherwood (right guard) slightly ahead of him on the depth chart.

Vegas traded wideout Bryan Edwards and a 2023 conditional seventh-round pick to the Atlanta Falcons in exchange for a 2023 fifth-round pick two weeks ago, which creates some opportunities for a wideout to move into three-wide receiver sets alongside Davante Adams and Hunter Renfrow.

The Raiders signed Demarcus Robinson within the first week of free agency and picked up Keelan Cole two days before they traded Edwards, so expect those two veterans to battle for the vacancy.

But Robinson has been the fourth or fifth pass-catching option in each of the last five years with the Kansas City Chiefs. Cole finished with the second-most targets in two out of four campaigns with the Jacksonville Jaguars (2017 and 2020), which certainly helped boost his receiving numbers.

Based on the timing of Cole’s arrival and Edwards’ departure, the Raiders may have big plans for the former though.

Though Clelin Ferrell will likely settle for a backup position, many wonder about his role and if he can salvage a disappointing tenure with the Silver and Black.

On the Raiders’ official website, Ferrell is listed at 6’4″, 265 pounds, but he’s bulked up in the past. If the fourth-year pro arrives at a weight close to 280 pounds, expect him to take most of his reps on the interior along with Bilal Nichols and Johnathan Hankins. At a size closer to what’s listed on the team’s site, he could rush off the edge from over the tackle on the strong side.

Remember, Graham will use multiple fronts, so we could still see Ferrell on the edge in sub-packages for even-man fronts, though this unit will most likely run a ton of odd-man fronts in nickel and base alignments.

Trayvon Mullen recently underwent an unspecified surgery, but he doesn’t seem too concerned about the recovery process.

The coaching staff may not give Mullen many reps or any at all following his offseason procedure. His availability won’t be an issue until training camp because he’s slated to start at one of the boundary positions. However, for peace of mind, an update on his condition would clear up any rumors or concerns.

In a quote tweet, Mullen said he’s aiming for seven or eight interceptions this season.

Will Nate Hobbs line up outside or remain in the slot?

During the NFL owners meetings, McDaniels said that Nate Hobbs will take reps at all the cornerback spots.

While players often cross-train at different positions, the Raiders can explore with Hobbs as an option on the outside if they’re not comfortable with Rock Ya-Sin or Anthony Averett on the boundary. That could open up nickel duties for someone else.

Ideally, Ya-Sin or Averett claim the starting job opposite Mullen, and Hobbs continues to play in the slot where he flourished through his 2021 rookie campaign.

While on the field for 76 percent of the defensive snaps last year, Hobbs recorded 74 tackles, three for loss, three pass breakups and an interception while allowing just 6.4 yards per target and one touchdown. According to Pro Football Focus, he only gave up 68 yards in man coverage (fewest among 2021 rookie cornerbacks), which makes him a candidate to start on the outside in Graham’s scheme.

Can Neil Farrell Jr. or Matthew Butler carve out a significant role?

The Raiders revamped their defensive line and kept Hankins as the only key starter from last year’s group.

As an early free-agent signing, Bilal Nichols should be one of the prominent defensive linemen in the rotation. He inked a two-year, $11 million deal.

Rookies Neil Farrell Jr. (fourth-rounder) and Matthew Butler (fifth-rounder) could push for the spot alongside Nichols and Hankins in odd-man fronts.

Farrell seems fit to replace Hankins though. At 6’4″, 330 pounds, he’s a powerful run-stuffer with strong hands who can handle two gaps and still take down ball-carriers after he discards offensive linemen in his path. The LSU product is probably the team’s future nose tackle.

Butler’s ability to rush the quarterback could help him earn early reps with the first unit over Farrell, Vernon Butler and Kyle Peko. Coming out of Tennessee’s varied front, he should pick up the pace of Graham’s scheme quicker than an average rookie.

Butler may have the biggest impact among the Raiders’ 2022 rookie class as a key contributor on a new-look defensive line.