The Las Vegas Raiders offensive line was one of the team’s biggest questions heading into the year after trading three linemen during the offseason while using their first-round pick on one last April.

Ultimately, the Raiders had to replace a total of five offensive linemen with left guard Richie Incognito dealing with a nagging calf injury that could never heal and right guard Denzelle Good suffering a torn ACL in the first game against Baltimore in addition to the three players they traded last offseason.

However, as the season progressed, the O-line improved and after a switch on the right side, it helped the offense produce, especially in the running game.

Today, we take a look back at the Las Vegas Raiders offensive line.

Las Vegas used their 2021 first-round pick on Alex Leatherwood at No. 17 in the draft. In his first season, Leatherwood played in every single game, while adapting to the speed of professional football.

The only contest where the Alabama alumnus did not play every snap came during the team’s second game of the season in Pittsburgh.

Leatherwood started the season at right tackle before switching to right guard during the first half of the season.

There were signs of inexperience from the 23-year-old as he committed 14 penalties and allowed quarterback Derek Carr to be sacked eight times.

Center Andre James said the more Leatherwood and the offensive line works this offseason and into training camp, the better the entire line will be heading into next season.

“There’s always room for improvement” James said days after Las Vegas’ loss in the AFC Wild Card round. “I think just dialing into technique when it’s important in certain situations, we got to have it. It’s a big thing and that comes with maturity and comes with reps and experience, so the more you play, the more experience you’ll get.”

Entering 2021, Andre James had to beat out a couple of players to win the center job, which he did.

In his first season as the starting center, the 24-year-old would go on to build chemistry with quarterback Derek Carr as the season evolved.

Following Good’s injury and after the switch of Leatherwood to right guard and Brandon Parker being inserted into the right tackle position all within the season’s first five weeks, James said that is when the O-line started to click and build trust as the Raiders made its postseason push.

“Towards the last end of this stretch of this season, I feel like we grew a lot first of all,” James said. “At the beginning of the season, we were all kind of new to each other, didn’t play much ball, so just being able to communicate, understanding how we fitted on some of our combinations, it was all still kind of new to us.

“Later in the season, we started to gel a lot, started to understand how we needed to communicate, understand what we needed from one another, which is huge as an offensive line.”

Heading into the offseason, James said he wants the O-line to take the next step in 2022.

“We just want to pick up right where we ended towards the season,” James said. “Just keep getting better every game, keep working hard. I think being a younger group you’re able to take a lot more, so as you felt some of the older teams that we played or older O-linemen, we just kept getting better each game and that’s what we wanted to do, just keep working.” 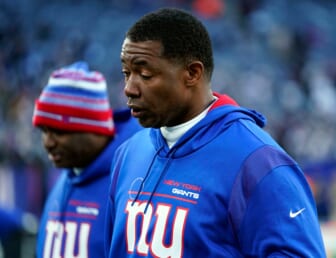 Out of the 2020 Raiders offensive line, left tackle Kolton Miller was the only one who would be on the line a year later.

As the most-experienced lineman for Las Vegas, Miller was able to lead and direct them as best he could.

This season, the former 2018 first-round pick by the Silver and Black committed five penalties and allowed four sacks for an overall Pro Football Focus player grade of 84.

Millier, 26, was one of two Raiders offensive linemen to play every snap this season, along with James.

James said that is due to the schedule the trainers have for both of them and the work both put in all year.

“I know me and Kolton, we do the same offseason routine,” James said. “I think it’s a good testament to our strength staff here, dialing into your body, making sure your body’s good. Really just taking care of it. I think me and Kolton do a pretty good job of that.”

Miller will enter the second year of his three-year contract he signed before the 2021 season looking to capitalize on the success he had this season, with the durability and nearly missing a nod to the Pro Bowl.

Brandon Parker was the sixth man on the line, nearly missing the nod to be the full-time starter to begin the season.

But when the decision was made to make a change on the offensive line, offensive coordinator Greg Olson and offensive line coach Tom Cable decided that Parker would be the team’s new right tackle prior to the game against Chicago.

Since Oct. 10 when the Bears came to Allegiant Stadium, the 26-year-old only missed one snap, which also includes the playoff game at Cincinnati.

In total, the former 2018 third-round pick would be penalized nine times and allowed eight sacks.

In 2022, Parker will look to retain the right tackle duties as he will look for a contract from the Raiders’ new general manager Dave Ziegler as a free agent. 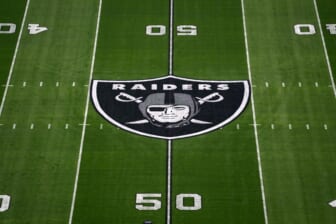 John Simpson was initially Incognito’s backup at left guard and while the 38-year-old was trying to return from the lingering calf injury, Simpson started every single game for the Raiders in 2021.

Although Simpson did not play every snap like James and Miller, he was still an integral piece of the O-line.

Simpson played every snap in 15 of 18 games this season, including the Wild Card game.

Despite committing 10 penalties, nine of which were holding calls, the 24-year-old allowed just three sacks.

Simpson will enter year three of his four-year contract in 2022.

Having the durability from this offensive line as the season progressed in the final two-thirds of the year was key to the Raiders making the playoffs and will remain just as important heading into next year.