In the first season in front of fans inside Allegiant Stadium and the second season on the strip, the 2021 Las Vegas Raiders looked to improve off their 2020 campaign when they went 8-8.

The Raiders would improve on their .500 season with 10 wins and a playoff berth and give the fans the opportunity to celebrate inside the Death Star.

In 2020, Darren Waller was the bright spot during the team’s inaugural season in Las Vegas.

Waller set the Raiders’ single-season record for most receptions with 107 catches. In addition, the 6-foot-6 tight end recorded 1,196 yards and nine touchdowns.

The 29-year-old was even being compared to some of the NFL’s best tight ends.

Entering 2021, Waller was looking to capitalize on his monster season and in the Raiders first game – against his former team – it seemed like his 2020 season was still going.

On his birthday, Waller recorded 10 receptions on 19 targets for 105 yards and a touchdown in the team’s 36-33 overtime victory on Monday Night Football over the Baltimore Ravens.

However, Waller would only see double-digit targets two more times as the offense was changing throughout the season.

As the season progressed, Waller would also be sidelined by an ankle injury prior to the team’s bye week and about a month later, his season would take another snag on Thanksgiving when he injured his leg before returning for the team’s season finale and the playoff game.

Despite his two injuries, No. 83 was still rooting on his teammates as he was the Raiders nominee for the Walter Payton Man of Year for his excellence both on and off the field with his contributions in the community.

Quarterback Derek Carr said Waller’s characteristics as a teammate is what all players can emulate.

“Our superstar player, our tight end, is our most selfless player on our team,” Carr said of Waller on Nov. 3. “When your best player is your most selfless player, everyone has to fall in line. ‘Who can argue about not getting targets if his targets go from 20 to four one day?’ He’s the biggest cheerleader on the sidelines the game he’s not playing.”

In total, the fifth-year NFL player totaled 55 receptions for 665 yards and two touchdowns in 11 games.

Heading into the offseason, Waller said this team has to focus and channel their playoff mentality into 2022.

“In the process of growing, we do need to face the things that we need to get better at individually and collectively in order to take that next step,” Waller said after the Raiders’ 26-19 loss to Cincinnati. “We’ve got to be able to start from square one and know we have what it takes to weather any kind of storm and take that into next year.”

Raiders tight end Foster Moreau entered 2021 as Waller’s pass catching back up and the primary blocking tight end. In addition, the former fourth-round pick in 2019 was also used on special teams.

During the times Waller was sidelined, the 24-year-old stepped up as his gameday role was centered more on offense compared to special teams. In the first opportunity as the primary tight end, Moreau made the most of it when Las Vegas welcomed Philadelphia to town in Week 7.

In a game where the Raiders passing game had to be relied upon when running back Josh Jacobs got injured, the week of practice leading up to the game was beneficial for Moreau, who caught all six of his passes for 60 yards and a touchdown in Las Vegas’ 33-22 win over the Eagles.

That touchdown came in tight, single coverage where Moreau had to fight for the ball as he landed in the endzone. It was one of three touchdowns on the season for Moreau, who caught 30 passes for 373 yards in 2021.

Moreau will enter the final year of his four-year contract next season as he will look to elevate his role in the passing game and his versatility he brings to Las Vegas.

After initially signing a three-year deal as an undrafted rookie with the Raiders, Derek Carrier returned to the organization in 2018 and signed another three-year contract with the team.

The nine-year veteran signed a one-year contract last spring as he brought depth and experience to the tight end room for a fourth consecutive season.

However, following the Raiders’ first loss of the season against the Los Angeles Chargers, Carrier would be sidelined with a pectoral injury and his return was cutting really close to the end of the season.

Ultimately, Carrier returned in the team’s final regular season game against the Chargers and received about the same number of snaps as he did prior to the injury. 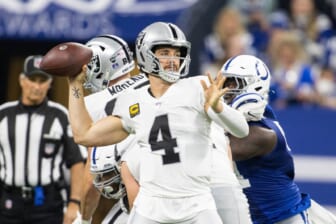 Also Read:
Derek Carr’s future with the Las Vegas Raiders about to clear up a lot

As the third tight end, he did not see much volume as the caught his only two passes of the season for 13 yards during the team’s 26-17 win on the road against Pittsburgh.

Like Moreau, Carrier was also used on special teams, both on punts and kickoffs.

Carrier is a free agent this spring and if the Raiders want to have his veteran presence in the locker room for a fifth consecutive year, they will bring him back.

Up next: Las Vegas Raiders quarterbacks