Colin Kaepernick: ‘The NFL is supposed to be a meritocracy. Let me compete,’ former 49ers QB is open to being a back-up

In a rarity, since a renewed push to get back in the NFL, Colin Kaepernick spoke publicly about trying to resume his playing career and has one simple message for team executives: “Let me compete.”

Kaepernick’s journey from dual-threat young-gun quarterback, to Super Bowl signal-caller, to champion of social advocacy, and then out of the league has been one of the most fascinating football tales over the last decade. While there has never been an official statement from the league and its owners that the Nevada alum is unwanted in the sport, that has been the unspoken stance taken by those in decision-maker roles since he last played a down in 2016.

Despite how divisive Kaepernick’s decision to speak out on social injustices by taking a knee during the playing of the national anthem was, many of the topics he pushed to the forefront of the NFL conversation have taken on a greater priority in society over the last few years. Turning him from an alienating figure to a sympathetic one as he has lost valuable years of his athletic prime on the sidelines.

Colin Kaepernick is fine with being an NFL backup next season

Over the last few months, the 34-year-old has started to make another push to gain entrance back into the sport he loves and there have been rumblings that several franchise’s might be interested. However, in a new interview with I Am Athlete — a show hosted by former NFL athletes like Chad Ocho Cinco and Adam Jones — Kaepernick revealed he has yet to be called for a workout by any team. And contrary to some opinions, he has no problem being a backup in 2022, as long as he is given a chance to compete for a starting role.

“I know I have to find my way back in. So, if I have to come in as a backup, that’s fine,” Kaepernick said. “But that’s not where I’m staying, and when I prove that I’m a starter, I want to be able to step onto the field as such. I just need that opportunity to walk through the door.

When asked why he still has a strong desire to return to the field despite being away from the professional ranks for six years, Kaepernick explained this his passion to come back is more than a want to compete, but to complete the goal he had since childhood, and got close to in 2012.

“I think more than anything it’s a passion. You have those dreams from when you were a kid. I’m gonna be an NFL player. I’m gonna win the Super Bowl. And for me I have unfinished business on that front,” said Kaepernick. “I’ve been to the Super Bowl. We were one play away. I need to finish that. My mentality isn’t just like, ‘Oh I want to go out and compete.’ No, I want to win a championship. And I know that may take different paths to get there but I wholeheartedly believe I’m gonna make that happen.”

Kaepernick: ‘When I did the deal with Nike, their value increased by $6 billion. Billion, with a ‘B.’

When asked about the reputation he may have after he became a national hot-button topic in 2016, he detailed how he has always been a respected member of the locker rooms he’s been in. And if it is a question of his being on the roster hurting a team’s bottom line, in the end, the controversy built around his advocacy made a couple of companies billions a few years back. 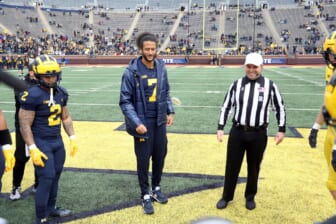 “[To a hypothetical NFL exec] You have ‘end racism’ in the back of your end zones, you’ve got ‘Black lives matter’ on your helmet. Everything I’ve said should be in alignment with what you’re saying publicly … When I first took a knee, my jersey went to No. 1,” he said. “When I did the deal with Nike, their value increased by $6 billion. Billion, with a ‘B.’ So if you’re talking about the business side, it’s beneficial. If you’re talking about the playing side, let me compete. You can evaluate me from there. The NFL is supposed to be a meritocracy. Let me come in and compete. If I’m not good enough get rid of me.”