Colin Kaepernick unveils website to track his $1 million in donations 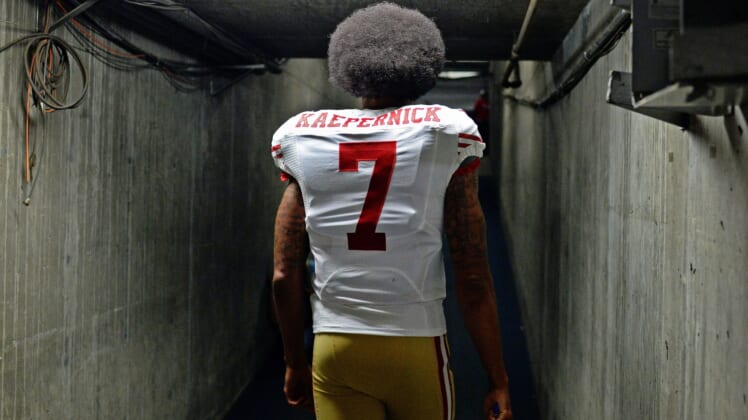 Colin Kaepernick made waves this preseason that are still reverberating across the national landscape when he refused to stand for the national anthem to protest police brutality in America.

He’s done a heck of a lot more than just kneel, however, putting his money quite literally where his mouth is in the form of a sizable series of donations. He promised to donate $1 million in the form of 10 separate $100,000 chunks each month, along with donating all his jersey proceeds in 2016 “to organizations working in oppressed communities.”

He has begun to live up to that promise.

“We have to continue to keep making steps toward real change! I promised I would donate a million dollars to organizations working in oppressed communities and we’re now in the second month of the Million Dollar Pledge! 100k a Month for 10 Months. Go to www.kaepernick7.com to see the organizations that I have donated to that are helping steer that change in the right direction. ‘I for one believe that if you give people a thorough understanding of what confronts them and the basic causes that produce it, they’ll create their own program, and when the people create a program, you get action.'” – Malcolm X

On Friday, Kaepernick unveiled a web site, kaepernick7.com, that will track his donations to not only hold himself accountable but to also ensure the entire process is transparent.

He told media members in September that he would be starting a site for these reasons: “To make sure not only that I’m transparent in what I’m doing but that these organizations are transparent with where the money is going as well,” Kaepernick said, per Matt Barrows of the Sacramento Bee.

Kaepernick’s new website has broken down each of these chunks into itemized sums for specific events and initiatives.

Regardless of your personal views on the man, his silent protest, his refusal to vote or anything else, I think we can all agree that the work he’s doing in communities of need is a good thing.