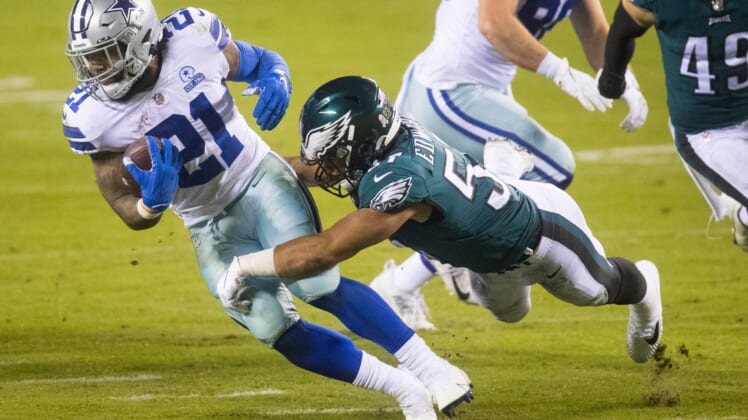 NBC’s Sunday Night Football broadcast of the Week 8 rivalry game between the Dallas Cowboys and Philadelphia Eagles delivered the kind of TV ratings the NFL can be proud of.

In a year where television networks have seen ratings plummet, especially for sports games, the NFL benefitted on Sunday night with a primetime telecast of an epic rivalry. Even if the game didn’t provide tons of excitement, plenty of viewers were happy to watch.

Whenever the Cowboys are on television, the NFL knows sports fans will tune in. Even with Dallas amid a disastrous season, a heated rivalry game against Philadelphia brought in an audience that saw NBC soar over other networks.

According to ShowBuzzDaily, NBC’s Sunday night broadcast topped out at 15.7 million watched the SNF Week 8 clash between the Eagles and Cowboys. The early numbers improved upon the 12.3 million from the initial viewership for the Week 7 primetime game and even surpassed the final numbers from that broadcast. While viewership dipped at the end, per Deadline.com, Sunday night’s game still finished with 14 million watching.

Unfortunately for NBC, the size of its television audience didn’t come close to matching the numbers from 2019. When Dallas and Philadelphia faced off in Week 7 last year on SNF, per SportsMediaWatch, 21.45 million tuned in. Given what we’ve seen throughout the NFL season, that’s not surprising.

Viewership and TV ratings have been down across the board in 2020. The NFL hasn’t been a stranger to millions of Americans turning to other channels this fall and NBC’s Sunday Night Football package has been impacted.

Of course, the NFL has still dominated compared to the NBA, NHL and MLB. The NBA Finals and NBA Playoffs lost a stunning number of viewers, MLB had its worst World Series ratings ever and the NHL finished with its NHL had the least-watched Stanley Cup in over a decade.

Since the 2020 presidential election cycle began, President Donald Trump has increased his attacks on the NFL and players who peacefully protest during the national anthem. Both during campaign stops and on Twitter, Trump has vowed to boycott the NFL and said he’d be happy if the season didn’t happen.

All of this came amid a major change by the league. Following the killings of George Floyd and Breonna Taylor by police officers, NFL commissioner Roger Goodell responded to an overwhelming number of players calling for him to speak out about social injustice. Eventually, he listened.

Goodell publicly supported the Black Lives Matter movement, while recognizing he handled the players’ kneeling poorly in 2016. He also mentioned Colin Kaepernick, with athletes like LeBron James calling for a public apology, admitting the NFL should have listened to Kaepernick’s message.

As a result of the NFL commissioner using his platform to highlight police brutality and systemic issues in the United States, the league and teams noticed. The NFL pledged $250 million to combat systemic racism and fans witnessed league-wide protests in Week 1, which has continued.

While there were fears that the NFL’s decision to support players and speak out about social injustice would deal a crippling blow to the league’s revenue, that hasn’t happened.

While TV ratings have dipped this season, the numbers reflect that being part of the 2020 election and changing behaviors during the COVID-19 pandemic. Viewership has dipped for NFL games, but networks seem perfectly happy.

In the end, it seems like the NFL will survive this and things could get even better when the election ends.