NFL world reacts to another humiliating performance from the Dallas Cowboys 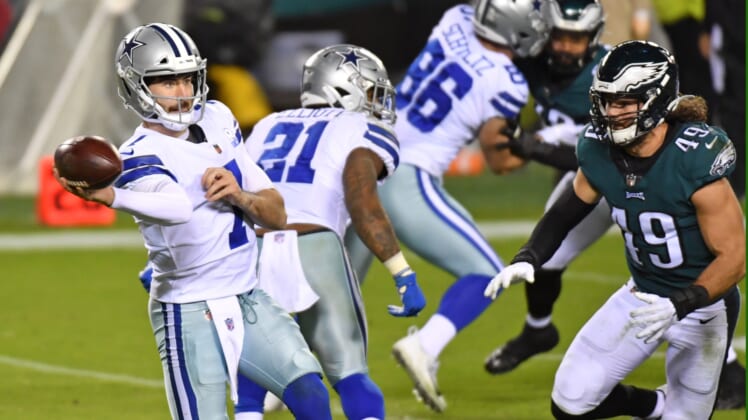 Dallas had lost two consecutive heading in by the combined score of 63-13. The team had lost its top-two starting quarterbacks, Dak Prescott and Andy Dalton, to injury.

Even then, what we saw from the Dallas Cowboys on national television seemingly brought football back decades. That’s not even hyperbole.

We’re not even sure where to begin with that one. Regardless of whether the call on the field should have stood, this had to be accompanied with Benny Hill music. Alas, someone will make that come to fruition.

This was the part of a larger performance from the Cowboys that saw them fall to the previously 2-4-1 Eagles by the score of 23-9. It also included this intentional safety (that’s a thing) for good measure.

As a whole, the Dallas Cowboys have now been outscored 86-22 over the past three games. They are now 2-6 on the season.

The NFL world had its reactions to Sunday night’s hilariously bad performance from America’s Team.

One really now has to wonder where the Cowboys go from here. We’re going to hear a lot coming out of Big D in the coming days. Perhaps, owner Jerry Jones looks to shake things up.

Either way, this is among the worst stretches of games we’ve seen from the Dallas Cowboys in some time.